4. Noun clauses begin with the following connectives:
(i) Pronouns: what, which, who, whom, whose.
(ii) Adverbs: when, where, why, how.
(iii) Conjuctions: if, that, whether.
For example:

5. Functions of Noun Clauses:
Noun clauses function like nouns or noun phrases. They can function as subject, object, complement, or object of a preposition, etc:

(iv) Object of Preposition:
You should pay attention to what the teacher says.
There is no complaint except that he comes late.
There is no meaning in what he says.
No one is aware of how he has opened the lock.
Everything depends on whether he helps us or not.
It was difficult to decide on where we should go for help.
They couldn’t agree about who should do the work.

(v) Complement of an Adjective:
I am not sure where he has gone.
They are confident that they will find out the thief.
It is doubtful whether she will reach in time.

(vi) Object of an Infinitive:
She wants to know what is going on here.
He came to see that he was mistaken.
She wanted to ask if l could help her.

(vii) In Apposition to a Noun (Noun + Noun clause)
The rumour that he was killed is true.
The idea that we should set up a factory should be pursued.
The fact that he has failed surprised his parents.

(viii) Object of a Participle:
Thinking that he would die, they took him to a hospital.
Hoping that they would win, they felt overjoyed.

6. Adverbial Clauses of Condition:
The adverbial clause of condition is introduced by if, unless, whether:

The underlined words in the above sentences form the adverbial clauses of condition. A conditional clause is a subordinate clause and expresses a condition.

(i) In an if-clause referring to a likely or possible situation in the future, the simple present tense is used. The future tense is used in the main clause:

Generally the main clause has the form: shall/will/may/can/must+first form of the verb:

(ii) In an if-clause referring to a condition that always has the same result, the simple present is used. The simple tense is used in the main clause too:

(iii) If a conditional clause refers to an unlikely or impossible situation in the present or future, the simple past tense is used. In the main clause, we use ‘should, ‘could , ‘might’, ‘would’, etc + first form of the verb:

(iv) If a conditional clause refers to something that did not happen in the past, the past perfect tense is used. In the main clause, we use would have/should have/could have/might have + third form of the verb:

But when the main clause is about the present, ‘would’, ‘could, ‘might’, etc. without have is used:

(v) If a conditional clause refers to an unlikely situation in the future, ‘were to’ or ‘should’ followed by an infinitive, is sometimes used instead of the simple past tense:

(vi) ‘If only’ is used to express a wish with reference to present or future time:

(vii) ‘If only’ is used to express a wish that past events had been different:

7. Adverbial Clauses of Time:
Adverbial clauses of time are used to say when something happens by referring to a period of time or to another event. The subordinating conjunctions after, before, since, when, while, whenever, till, as, etc. are used.

A relative clause is essential to the clear understanding of the noun it defines or qualifies. For example,
‘ Who came into the house ’ is a relative clause without which it will not be clear to which ‘boy’ we are referring.

(iv) In a defining clause, we can omit the relative pronoun except when it is the subject of a verb:

In this sentence, the relative pronoun is omitted. But we cannot omit it in the following sentence:

(v) In a non-defining clause the preposition governing the relative is rarely placed at the end of the clause:

(vi) In a defining clause the preposition governing the relative is generally placed at the end of the clause:

(viii) The relative pronouns differ according to whether they refer to persons or things and according to thier case:

(ix) Relative clauses are introduced by relative adverbs ‘where’, ‘”when’, ‘why’.

10. Use of Pronouns for Persons:
(i) In the nominative case, we use ‘who’ or ‘that’. ‘That’ is used after superlatives and after all, nobody, no one, somebody, someone, anybody, etc. when we can use either  ‘who’ or ‘that’:

(ii) In the objective case, we use ‘whom’, ‘who’, ‘that’. ‘ Whom is considered more formal than ‘who’. However, in spoken English we use ‘who’ or ‘that’. There is a tendency to omit the objective relative pronoun altogether:

(iii) We use ‘whom’ or ‘that’ with a preposition.
Generally, the preposition is placed before the relative pronoun:
The boy to whom I was speaking is my neighbour. In informal speech, the preposition is usually moved to the end of the clause and then ‘whom’ is often replaced by ‘that’ or it is omitted:

(iv) In the possessive case, we use the relative pronoun ‘whose’:

11. Use of Pronouns for Things:
(i) In the nominative case, the relative pronouns ‘which’ and ‘that’ are used. Which is considered more formal:

(ii) In the objective case, we use ‘which’ or ‘that’ or omit the relative pronoun:

We generally use ‘that’ after all, much, little, everything, none, no and compounds of no or after superlatives or we omit the relative pronoun altogether.

(iii) When we use the objective case with a preposition, we place the preposition before ‘which’. But it is more usual to move it to the end of the clause, using ‘which’ or ‘that’ or we omit the relative pronoun altogether:

(iv) In the possessive case, we use the relative pronoun ‘whose’:

(ii) In the objective case, we use ‘whom’ and “who’. ‘Who’ is sometimes used in conversation:

(iii) ‘ Whom’ is used with a preposition in the objective case. We can also use ‘ who’ if we move the preposition to the end of the clause:

(iv) We use ‘whose’ in the possessive case:

(iii) The relative pronoun ‘which’ is also used with a preposition:

(iv) In the possessive case, ‘whose’ or ‘of which’ are used:

15. Relative Adverbs:
The relative adverbs ‘when’, ‘where’, ‘why’ are used to replace a preposition and the relative pronoun ‘which’. 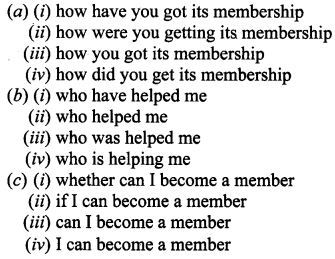