The exact words spoken by Sohan are put within inverted commas. But when we give the substance of what Sohan said, it is called the Indirect Speech.

3. Rules for the Change of Pronouns: 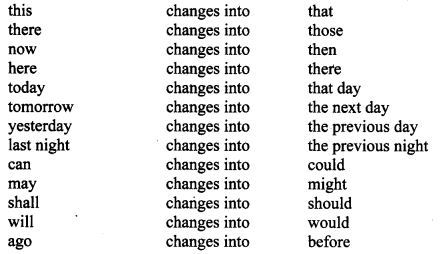 7. Rules for the Change of Interrogative (Questions) sentences:

10. Sentences with Question Tags
(i) In the indirect speech the question-tag is usually left.
(ii) In indirect speech these words are removed and the word ‘respectfully’ is used in the reporting clause.
Direct    : Mahesh said, “Sir, may I go home?”
Indirect: Mahesh respectfully asked his sir if he might go home.

Note  : ‘Yes’ of ‘No’ hides a complete sentence. Therefore, change yes/no into a short answer.

(a) Look at these sentences.

(b) Look at these sentences.

(i)  Use ‘exclaimed’ in place of ‘said’ in the reporting verb in the indirect speech.
(ii) In Indirect sentences, we use exclamatory sentences as statements.
(iii) Indirect speech begins with that and full stop (•) is used instead of the exclamation mark (!).

Exercise (Solved)
Change the following sentences into Indirect Speech:
(i) He said, “I will do it now.”
Answer: He said that he would do it then.

(v) She said, “Where is your father?”
Answer: She inquired where his father was.

(vi) He said to me, “Please take your book.”
Answer: He requested me to take my book.

(viii) He said to me, “May you live long!”
Answer: He prayed that I might live long.

(ix) She said, “Goodbye friends!”
Answer: She bade goodbye to her friends.

(ix) The student said, “Alas! I wasted my time last year.”
Answer: The student regretted that he had wasted his time the previous year.