2.Cork cambium forms tissues that form the cork. Do you agree with this statement? Explain.
Soln. Yes, I agree with this statement. Cork cambium cuts off cells both on its outer side and inner side. The cells cut off on outer side form cork and cells cut off on inner side form secondary cortex. The cells of cork are dead whereas those of secondary cortex are living.

3.Explain the process of secondary growth in the stems of woody angiosperms with the help of schematic diagrams. What is its significance?
Soln. Secondary growth is the formation of secondary tissues from lateral meristems. It is found in dicots only. It increases the diameter of the stem. Secondary tissues are formed by two types of lateral meristems, vascular cambium and cork cambium. Vascular cambium produces secondary vascular tissues while cork cambium forms periderm.The vascular bundles in dicot stem are conjoint, collateral, open and are arranged in a ring. The cambium present between xylem and phloem in vascular bundles is called fascicular or intrafascicular cambium. Besides this, some cells of medullary rays also become meristematic and this is called interfascicular cambium. Both these cambia collectively constitute complete ring of vascular cambium. This ring of vascular cambium divides periclinally to cut off cells both on inner side and outer side. The cells cuts off on outer side are secondary phloem and inner side are secondary xylem. Amount of secondary xylem cut off is more than secondary phloem and thus with the formation of secondary tissue, increase in girth or diameter occurs. The structure of secondary xylem and secondary phloem is similar to that of primary xylem and primary phloem. With the increase in secondary tissue, the primary xylem and primary phloem get crushed. The ray initials of vascular cambium ring divide by tangential divisions and add new cells. These new cells produced on both the sides of ray initials remain meristematic for sometime and then differentiate into parenchymatous cells of rays. The rays, produced by vascular cambium in between the secondary xylem and secondary phloem, are called secondary medullary rays. They are usually one to few layers in thickness and one to several layers in height. The medullary rays form the radial systejn responsible for radial conduction of solutes. They maintain connection between pith and cortex There is a marked difference in activity of cambium with change in season. In spring, the activity of cambium is more and hence the wood elements are larger in size with wide lumen. The activity of cambium is less during autumn and the wood elements are smaller in size with narrow lumen. Spring wood and autumn wood of a year constitute annual ring.
In order to increase in girth and prevent harm on the rupturing of the outer ground tissues due to the formation of secondary vascular tissues, dicot stems produce a cork cambium or phellogen in the outer cortical cells. Phellogen cells divide on both the outer side as well as the inner side to form secondary tissues. The secondary tissue formed on the inner side is called secondary cortex while the tissue formed on outer side is called cork. 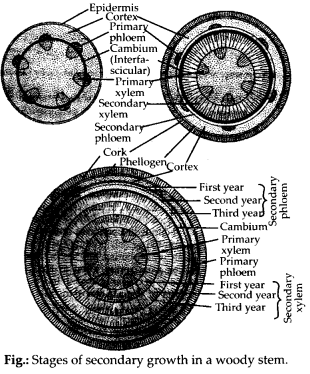 Significance of secondary growth is as
follows:
(i) It adds to the girth of the plant thus provides support to increasing weight of aerial parts due to growth.
(ii)It’ produces a corky bark around the tree trunk that protects the interior from abrasion, heat, cold and infection.
(iii)It adds new vascular tissues for replacing old non-functioning one as well as for meeting increased demand for long distance transport of sap and organic nutrients. 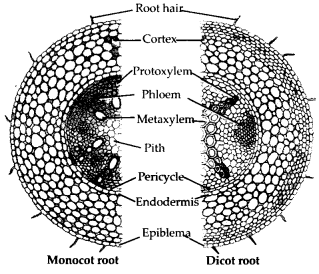 (b) Differences between monocot and dicot stems are illustrated in the following figure and table. 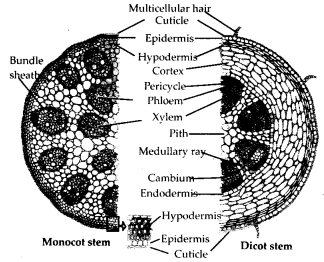 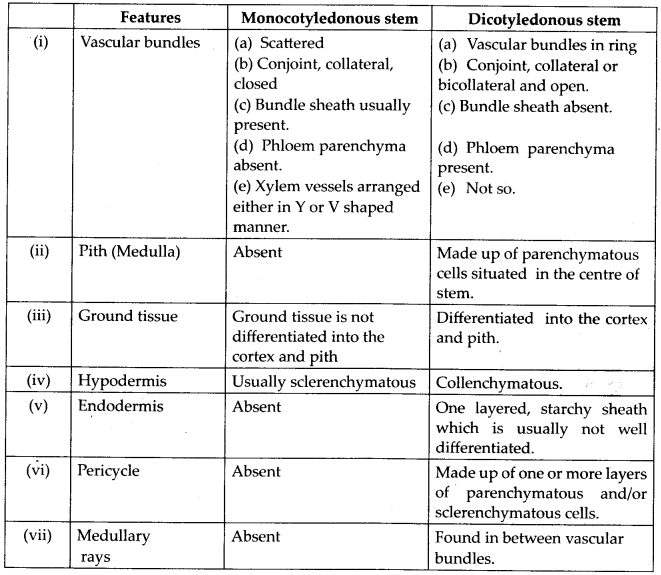 6.The transverse section of a plant material shows the following anatomical features – (a) the vascular bundles are conjoint, scattered and surrounded by a sclerenchymatous bundle sheath, (b) phloem parenchyma is absent. What will you identify it as?
Soln. The plant material is identified as monocot stem.

8.What is stomatal apparatus? Explain the structure of stomata with a labelled diagram.
Soln.Stomata are structures present in the epidermis of leaves. Stomata regulate the process of transpiration and gaseous exchange. Each stoma is composed*of two bean shaped cells known as guard cells which enclose stomatal pore. The outer walls of guard cells (away from the stomatal pore) are thin and the inner walls (towards the stomatal pore) are highly thickened. The guard cells possess chloroplasts and regulate the opening and closing of stomata. Sometimes, a few epidermal cells, in the vicinity of the guard cells become specialised in their shape and size and are known as subsidiary cells. The stomatal aperture, guard cells and the surrounding subsidiary cells are together called stomatal apparatus. 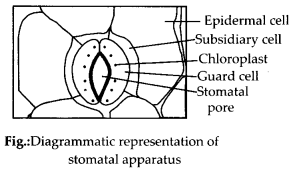 10.How is the study of plant anatomy useful to us?
Soln. Study of internal structures of plants is called plant anatomy. Study of plant anatomy is useful:
-for solving taxonomic problems.
-for knowing homology and analogy of various plant groups.
-to differentiate the superior and inferior, standard and substandard or specified and unspecified woods.
-in establishing purity and correct identity of plant parts in pharmacognosy (science connected with sources, characteristics and possible medicinal uses).
-in knowing the structural peculiarities of different groups of plants.

11 .What is periderm? How does periderm formation take place in the dicot stems?
Soln. phelloderm, phellogen and phellem together constitute the periderm. Periderm is protective in function.Dicot stems produce cork cambium or phellogen in the outer cortical cells. Phellogen cells divide on both the outer side as well as the inner side to form secondary tissues. The secondary tissue produced on the inner side of the phellogen is called secondary cortex or phelloderm. On the outer side phellogen produces cork or phellem.

12.Describe the internal structure of a dorsiventral leaf with the help of labelled diagram.
Soln. 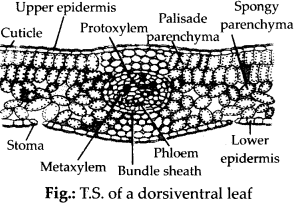