1.Discuss how classification systems have undergone several changes over a period of time?
Soln. Biological classification is the scientific procedure of arranging organisms in a hierarchical series of groups and sub-groups on the basis of their similarities and dissimilarities. Scientists have proposed different systems of classification which have undergone several changes from time to time.
Earlier Aristotle proposed artificial system of classification, which divided animals and plants on basis of habitat. E.g., Aquatic (fish, whale), terrestrial (e.g., reptiles, cattle) and aerial (e.g., bat, birds). Then, natural system of classification was based on morphology^ anatomy, physiology, reproduction, ontogeny, cytochemistry, etc. After natural system, organisms were classified on basis of evolutionary relationships called phyloge¬netic system. It is based on cytotaxonomy, chemotaxOnomy, numerical taxonomy and cladistic taxonomy.

2.State two economically important uses of:
(a) heterotrophic bacteria
(b) archaebacteria
Soln. (a) Heterotrophic bacteria: They include saprotrophic, symbiotic and parasitic bacteria. They act as natural scavengers as they dispose off the dead bodies, organic wastes, release raw materials for reutilisation. They also help in sewage disposal, manure production etc. Symbiotic bacteria help in nitrogen fixation. Some bacteria arq employed in the production of a number of industrial products like lactic
acid, curd, cheese, butter, vinegar etc. Some bacteria are used in preparation of serum, vaccines, vitamins, enzymes, antibiotics etc. e.g., Pseudomonas, Xanthomonas, etc.
(b) Archaebacteria : Archaebacteria are employed in the production of gobar gas from dung and sewage and in ruminants, they cause fermentation of cellulose.

3.What is the nature of cell-wall in diatoms?
Soln. The cell walls of diatoms are called frustules. The cell wall is chiefly composed of cellulose impregnated with glass-like silica. It is composed of two overlapping halves (or theca) that fit together like two parts of a soap box or petri dish. The upper half (lid) is called epitheca and the lower half (case) is called hypotheca. The outer covering possesses very fine markings, pits, pores and ridges. The siliceous frustules of diatoms do not decay easily. They pile up at the bottom of water reservoirs and form big heaps called diatomite or diatomaceous earth. It may extend for several hundred metres in certain areas from where the same can be mined.

4.Find out what do the terms ‘algal bloom’ and ‘red tides’ signify.
Soln.The rapid increase in populations of algae and other phytoplanktons, in particular cyanobacteria, in water bodies rich in organic matter is called algal bloom. The density of the organisms may be such that it may prevent light from passing to lower depths in the water body. Algal blooms are caused by an increase in levels of nitrate, a mineral ion essential for algal and bacterial growth.
The source of increased nitrate may be from agricultural fertilizers, which are leached – into water systems from the land, or sewage effluent.
Red tides are caused by a sudden, often toxic proliferation of marine phytoplankton, notably dinoflagellates, that colour the sea red, brown, or yellowish due to the high concentration of the photosynthetic accessory pigments. Some dinoflagellates, such as Gonyaulax, produce potent toxins, which may kill fish and invertebrates outright or accumulate in the food chain, posing a hazard to humans eating shellfish and other seafood. These phytoplanktonic blooms may be related to nutrient-rich inputs from the land, or upwelling oceanic waters, and are initiated by the activation of cyst-like forms lying on the sea bed.

6.Describe briefly the four major groups of protozoa.
Soln. All protozoans are heterotrophs and live as predators or. parasites. They are be-lieved to be primitive relatives of animals. They are classified into four groups on the basis of locomotory organelles.
(i) Amoeboid protozoans : These organisms live in fresh water, sea water or moist soil. They move and capture their prey by developing pseudopodia (false feet) as in Amoeba. Some of them such as Entamoeba are parasites.
(ii)Flagellated protozoans : The members of this group are either free-living or parasitic. They have flagella for locomotion. The parasitic forms cause diseases such as sleeping sickness e.g., Trypanosoma.
(iii)Ciliated protozoans : These are aquatic, actively moving organisms because of the presence of thousands of cilia. They have
a cavity (gullet) that opens to the outside ‘
of the cell surface. The coordinated movement of rows of cilia causes the water laden with food to be steered into the gullet e.g., Paramecium. ~
(iv)Sporozoans: This includes diverse parasitic organisms that have an infectious spore¬like stage in their life cycle. Locomotory organs are absent. The most notorious N . is Plasmodium (malarial parasite) which
causes malaria which has a staggering effect on human population.

7.Plants are autotrophic. Can you think of some
plants that are partially heterotrophic?
Soln. Some insectivorous plants like Drosera,
Nepenthes, Utricularia are partially heterotrophic
plant. These plants are deficient in nitrogen
content but are otherwise autotrophic. They, trap various insects to obtain nitrogen from them. Rest, the food i.e., carbohydrate is
manufactured by themselves.

8.What do the terms phycobiont and mycobiont signify?
Soln. A lichen is structurally organised
entity consisting of the permanent association
of a fungus and an alga. The fungal component of a lichen is called mycobiont and the algal component is called phycobiont. Both mycobiont and phycobiont are associated
in symbiotic union in which the fungus is predominant and alga is subordinate partner. – ; Fungus provides the structural covering that protects alga from unfavourable conditions,
i.e., drought, heat, etc. It also traps moisture from the atmosphere and anchors the
lichen to a rock, tree bark, leaves and other similar supports. The alga prepares organic food by the process of photosynthesis from carbon dioxide. If the algal component is cyanobacteria (blue-green alga), they fix atmospheric nitrogen in addition to preparation of food.

9.Organise a discussion in your class on the topic – ‘Are viruses living or non-living’?
Soln. Viruses are regarded as intermediate between non-living entities and living
organisms. It is very difficult to ascertain whether they are living or non-living. Some . characters of viruses suggest their non-living nature whereas many other characters suggest their living nature.
They resemble non-living objects in –
(i) Lacking protoplast.
(ii)Ability to get crystallised.
(iii)Inability to live independent of living cell.
(iv)High specific gravity which is found
.only in non-living objects.
(v)Absence of respiration.
(vi)Absence of energy storing system.
(vii)Absence of growth and division. Instead different parts are synthesized separately.
Viruses resemble living beings in –
(i)Being formed of organic macromolecules which occur only in living beings.
(ii)Presence of genetic material.
(iii)Ability to multiply or reproduce although only inside living cell.
(iv)Occurrence of mutations.
(v) Occurrence of enzyme transcriptase in most viruses.
(vi)Some viruses like Pox virus contains vitamins like riboflavin and biotin.
(vii)Infectivity and host specificity.
(viii)Viruses are ‘killed’ by autoclaving and ultraviolet rays.
(ix)They breed true to their type. Even variations are inheritable.
(x) They take over biosynthetic machinery of the host cell and produce chemicals required for their multiplication.
(xi)Viruses are responsible for a number of infectious’ diseases like common cold, epidemic influenza, chicken pox.

10.What are the characteristic features of Euglenoids?
Soln. The euglenoid flagellates are the most interesting organisms having a mixture of animal and plant characteristics. The characteristic features are:
(i) They are unicellular flagellates.
(ii)These protists lack a definite cellulose cell wall. Instead the cells are covered by
a thin membrane known as pellicle. The pellicle is composed of protein, lipid and carbohydrates.
(iii)One or two flagella which help these protists in active swimming are present. If two flagella are present, then one is long and other is short. They are tinsel – shaped i.e., with two longitudinal rows of fine hairs. Each flagellum has its own basal granule. The two flagella join with each other at a swelling, called paraflagellar body and finally only one long flagellum emerges out through the cytostome.
(iv)Cell at the anterior end possesses an eccentric mouth or cytostome which leads into a flask-shaped cavity viz. gullet or cytopharynx. Gullet opens into a large basal reservoir.
(v) At one end of the reservoir, the cytoplasm contains an orange red stigma (eye spot). The eye spot is a curved plate with orange-red granules and contains red pigment astaxanthin. Both paraflagellar body and eye spot act as photoreceptors.
(vi)Just below the reservoir is found a contractile vacuole having many feeding canals. The contractile vacuole takes part in osmoregulation. It expands and pumps its fluid contents in the reservoir.
(vii)The mode of nutrition in euglenoids is holophytic or photoautotrophic. Some euglenoids show mixotrophic nutrition (both holophytic as well as saprobic mode).
(viii)Cytoplasm is differentiated into ectoplasm and endoplasm. Nucleus is large and occurs roughly in middle. The envelope and nucleolus persist during cell division.
(ix)Each chloroplast is composed of a granular matrix traversed by 10-45 dense bands and is covered by 3-membraned envelope. They contain the photo¬synthetic pigments-chlorophyll – n, b. They store carbohydrates as paramylon bodies, scattered throughout the cytoplasm.
(x) Asexual reproduction occurs by longitudinal binary fission. The flagellum is duplicated before cell division.
(xi)Under unfavourable condition the euglenoids form cysts to perennate the dry period.
(xii)Sexual reproduction is not observed.

11.Give a brief account of viruses with respect to their structure and nature of genetic material. Also name four common viral diseases.
Soln. Virus (L. poisonous fluid) is a group of ultramicroscopic, non-cellular, highly infectious agents that multiply only intracellularly- inside the living host cells without involving growth and division. Outside the host cells, they are inert particles. They are nucleoproteins having one or more nucleic acid molecule, either DNA or RNA, encased in a protective coat of protein or lipoprotein. A virus consist of two parts – nucleoid (genome) and capsid. An envelope and few enzymes are present in some cases,
(i) Nucleoid : The nucleic acid present in the virus is called nucleoid and it represents viral chromosome. It is made up of a single molecule of nucleic acid. It may be linear
or circular and nucleic acid can be DNA or RNA. It is the infective part of virus which utilizes the metabolic machinery of the host cell for synthesis and assembly of viral components.
(ii)Capsid : It is a protein covering around genetic material. Capsid have protein subunits called capsomeres. Capsid protects nucleoid from damage from physical and chemical agents. ,
(iii)Envelope : It is the outer loose covering present in certain viruses like animal viruses (e.g., HIV) but rarely present in plant and bacterial viruses and made of protein of viral origin and, lipid and carbohydrate of host. Outgrowths called spikes may be present. Envelope proteins have subunits called peplomers. A virus without envelope is naked virus.
(iv)Enzymes : Rarely, lysozymes are found in bacteriophages. Reverse transcriptase enzyme (catalyses RNA to DNA synthesis) is found in some RNA viruses like HIV. Some common viral diseases are – influenza, polio, measles, chickenpox, hepatitis, AIDS, bird flu, SARS (Severe Acute Respiratory Syndrome) etc.

12.Give a comparative account of the classes of Kingdom Fungi under the following:
(i) mode of nutrition (ii) mode of reproduction
Soln. 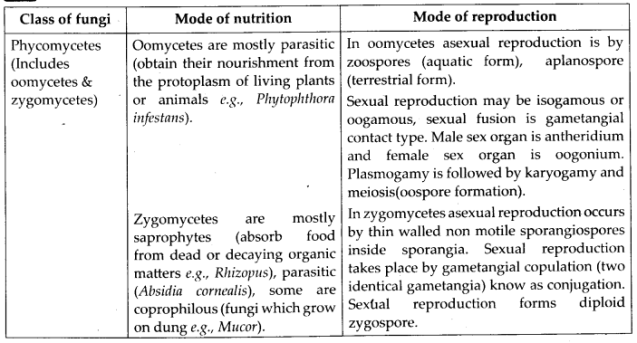 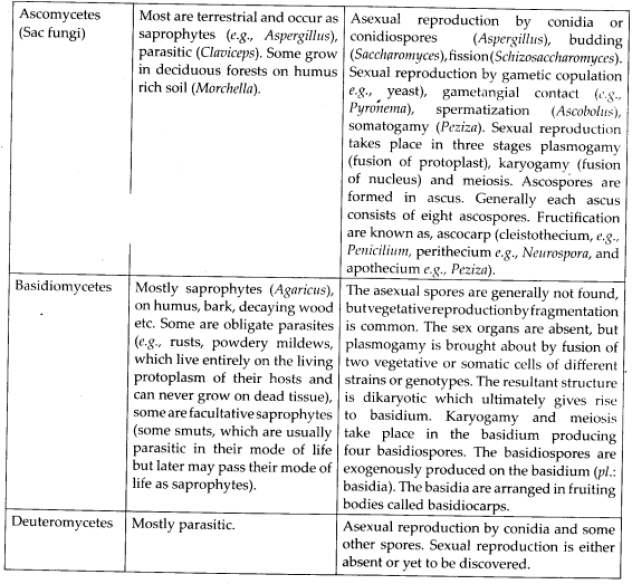