1. Name the components of the formed elements in the blood and mention one major function of each of them.
Solutlion: Blood corpuscles are the formed ele-ments in the blood, they constitute 45% of the blood. Formed elements are – (erythrocytes, RBCs or red blood corpuscles), (leucocytes, WBCs or white blood corpuscles) and throm¬bocytes or blood platelets. The major function of RBCs is to transport oxygen from lungs to body tissues and COz from body tissues to the lungs. White blood cells provide immunity to the body. Blood platelets play important role in blood clotting.

4. Why do we consider blood as a connective tissue?
Solutlion: A connective tissue connects different tissues or organs of the body. It consists of living cells and extracellular matrix. Blood is vascular connective tissue, it is a mobile tissue consisting of fluid matrix and free cells. Blood transports materials from one place to the other and thereby establishes connectivity between different body parts.

5. What is the difference between lymph and blood?
Solutlion: The differences between blood and lymph are given below: 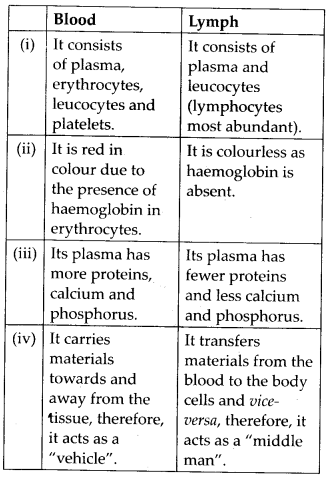 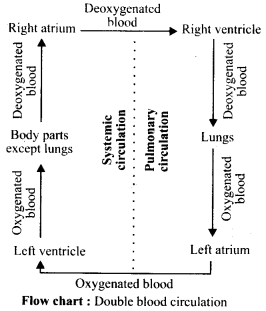 Flow chart: Double blood circulation Double circulation or separation of systemic and pulmonary circulations provides a higher metabolic rate to the body and also allows the two circulations to have different blood pressures according to the need of the organs they supply. 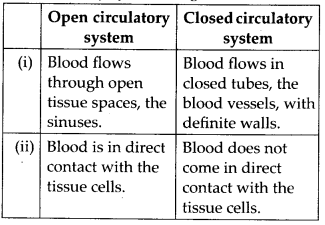 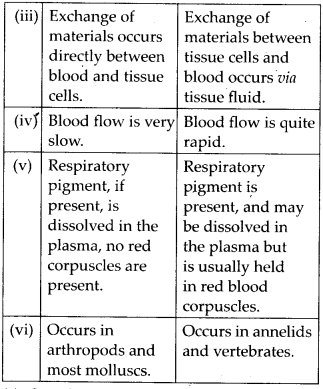 (c) Systole is contraction of heart chambers in order to pump out blood while diastole is relaxation of heart chambers to receive blood. The contraction of a chamber or systole decreases its volume and forces the blood out of it, whereas its relaxation or diastole brings it back to its original size to receive more blood.
(d) P wave is a small upward wave of elec-trocardiograph that indicates the atrial depolarisation (contraction of atria). It is caused by the activation of SA node. T-wave is a dome shaped wave of electro-cardiograph which represents ventricular repolarisation (ventricular relaxation).

9. Why do we call our heart myogenic?
Solutlion: The heart of molluscs and vertebrates including humans is myogenic. It means heart beat is initiated in heart itself by a patch of modified heart muscle called sino-atrial node or pacemaker which lies in the wall of the right atrium near the opening of the superior vena cava.

11. What is the significance of atrio-ventricular node and atrio-ventricular bundle in the functioning of heart?
Solutlion: Atrio-ventricular node (AVN) is a mass of neuromuscular tissue, which is situated in wall of. right atrium, near the base of inter-atrial septum. AV node is the pacesetter of the heart,- as it transmits the impulses initiated by SA node to all parts of ventricles. Atrio-ventricular bundle (A-V bundle) or bundle of His is a mass of specialised fibres which originates from the AVN. Within the myocardium of the ventricles the branches of bundle of His divide into a network of fine fibres called Purkinje fibres. The bundle of His and the Purkinje fibres convey impulse of contraction from the AVN to the myocardium of the ventricles.

12. Define a cardiac cycle and the cardiac output.
Solutlion: The sequential events in the heart which are repeated cyclically is called cardiac cycle and it consists of systole (contraction) and diastole (relaxation) of both the atria and ventricles. The duration of a cardiac cycle is 0.8 seconds. Periods of cardiac cycle are atrial systole (0.1 second), ventricular systole (0.3 second) and complete cardiac diastole (0.4 second).
The amount of blood pumped by heart per minute is called cardiac output. It is calculated by multiplying stroke volume (volume of blood pumped by each ventricle per minute) with heart rate (number of beats per minute). The heart of normal person beats 72 times per minute and pumps out about 70 mL of blood per beat. Therefore, cardiac output averages 5000 mL or 5 litres.

13. Explain heart sounds.
Solutlion: The beating of heart produces characteristic sounds which can be heard by using stethoscope. In a normal person, two sounds are produced per heart beat. The first heart sound Tubb’ is low pitched, not very loud and of long duration. It is caused partly by the closure of the bicuspid and tricuspid valves and partly by the contraction of muscles in the ventricles.
The second heart sound ‘dubb’ is high pitched, louder, sharper and shorter in duration. It is caused by the closure of the semilunar valves and marks the end of ventricular systole.

14. Draw a standard ECG and explain the different segments in it.
Solutlion: ECG is graphic record of the electric current produced by the excitation of the cardiac muscles. The instrument used to record the changes is an electrocardiograph. A normal electrogram (ECG) is composed of a P wave, a QRS wave (complex) and a T wave. The P Wave is a small upward wave that represents electrical excitation or the atrial depolarisation which leads to contraction of both the atria (atrial contraction). It is caused by the activation of SA node. The impulses of contraction start from the SAnode and spread throughout the artia.
The QRS Wave (complex) represents ventricular depolarisation (ventricular contraction). It is caused by the impulses of the contraction from AV node through the bundle of His and Purkinje fibres and the contraction of the ventricular muscles. Thus this wave is due to the spread of electrical impulse through the ventricles.
The T Wave represents ventricular repolarisation (ventricular relaxation). The potential generated by the recovery of the ventricle from the depolarisation state is called the repolarisation wave. The end of the T-wave marks the end of systole.
ECG gives accurate information about the heart. Therefore, ECG is of great diagnostic value in cardiac diseases. 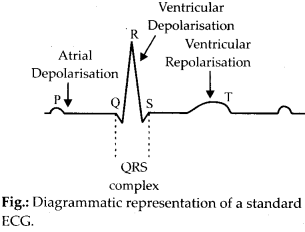