NCERT Solutions For Class 11 Biology Breathing and Exchange of Gases

Topics and Subtopics in NCERT Solutions for Class 11 Biology Chapter 17 Breathing and Exchange of Gases:

2. State the volume of air remaining in the lungs after a normal breathing.
Solution: When a person breathes normally, the amount which remains in the lung after normal expiration, is called functional residual capacity. It is the sum of residual volume and the expiratory reserve volume (FRC = RV + ERV). It is about 2100 – 2300 mL of air.

3. Diffusion of gases occurs in the alveolar region only and not in the other parts of respiratory system. Why?
Solution: For efficient exchange of gases, respi: atory surface must have certain characteristics such as (i) it must be thin, me ist and permeable to respiratory gases (ii) it must have large surface area, (iii) it must be highly vascular. Only alveolar region has these characteristics. Thus, diffusion of gases occurs in this region only.

8. What is the effect of pCO2on oxygen transport?
Solution: Increase in pCO2 tension in blood brings rightward shift of the oxygen dissociation curve of haemoglobin thereby decreasing the affinity of haemoglobin for oxygen. This effect is called Bohr’s effect. It plays an important role in the release of oxygen in the tissues.

9. What happens to the respiratory process in a man going up a hill?
Solution: Rate of breathing will increase in order to supply sufficient oxygen to blood because air in mountainous region is deficient in oxygen.

12. Have you heard about hypoxia? Try to gather information about it, and discuss with your friends.
Solution: Hypoxia is a condition of oxygen shortage in the tissues. It is of two types:
(i) Artificial hypoxia: It results from shortage of oxygen in the air as at high altitude. It causes mountain sickness characterised by breathelessnes, headache, dizziness and bluish tinge on skin.
(ii) Anaemic hypoxia: It results from the reduced oxygen carrying capacity of the blood due to anaemia or carbon monoxide poisoning. In both cases, less haemoglobin is available for carrying 02. 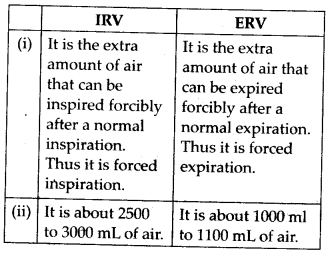 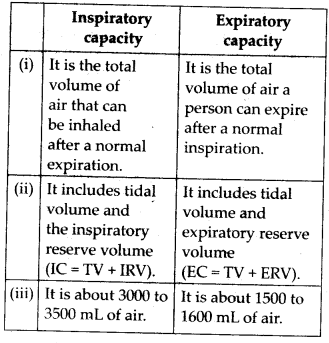 (c) Differences between vital capacity and total lung capacity are as follows: 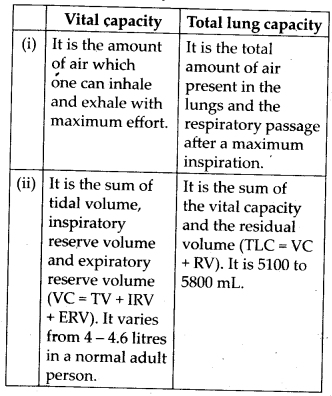 14. What is tidal volume? Find out the tidal volume (approximate value) for a healthy human in an hour.
Solution: Tidal volume is the volume of air inspired or expired with each normal breath. This is about 500 mL in an adult person. It is composed of about 350 mL of alveolar volume and about 150 mL of dead space volume. The alveolar volume consists of air that reaches the respiratory surfaces of the alveoli and engages in gas exchange. The dead space volume consists of air that does not reach the respiratory surfaces.
A healthy man can inspire or expire approximately 6000 to 8000 mL of air per minute. Therefore, tidal volume for a healthy human in an hour is 360 – 480 mL of air.