Topics and Subtopics in NCERT Solutions for Class 11 Biology Chapter 20 Locomotion and Movement:

1. Draw the diagram of a sarcomere of skeletal muscle showing different regions.
Solution: 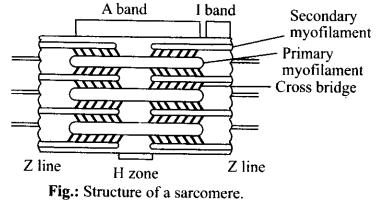 3. Describe the important steps in muscle contraction.
Solution: Mechanism of muscle contraction is explainei by sliding filament theory which states that contraction of a muscle fibre takes place by the sliding of the thin filaments over the th’ ck filaments. As a nerve impulse reaches the terminal end of the axon, synaptic vesicles fuse with the axon membrane and release a chemical transmitter, acetylcholine and binds to receptor sites of the motor end plate. When depolarization of the motor end plate reaches a certain level, it creates an action potential. An action potential (impulse) passes from the motor end plate over the sarcolemma and then into the T-tubules and sarcoplasmic reticulum and stimulates the sarcoplasmic reticulum to release calcium ions into the sarcoplasm. The calcium ions bind to troponin causing a change in its shape and position. This in turn alters shape and the position of tropomyosin, to which troponin binds. This shift exposes the active sites on the F-actin molecules. Myosin cross-bridges are then able to bind to these active sites. The heads of myosin molecules project laterally from thick myofilaments towards the surrounding thin myofilaments. These heads are called cross bridges. The head of each myosin molecule contains an enzyme mysoin ATPase. In the presence of myosin ATPase,Ca++ and Mg++ ions, ATP breaks down into ADP and inorganic phosphate, releasing energy in the head.
Energy from ATP causes energized myosin cross bridges to bind to actin.

The energized cross-bridges move, causing thin myofilaments to slide along the thick myofilaments.

4. Write true or false. If false change the statement so that it is true.
(a) Actin is present in thin filament.
(b) H-zone of striated muscle fibre represents both thick and thin filaments.
(c) Human skeleton has 206 bones.
(d) There are 11 pairs of ribs in man.
(e) Sternum is present on the ventral side of the body.
Solution: (a) True
(b) False – H-Zone of striated muscle fibres represents only thick filaments.
(c) True
(d) False – There are 12 pairs of ribs in man.
(e) True

5. Write the differences between:
(a) Actin and Myosin
(b) Red and White muscles
(c) Pectoral and Pelvic girdle
Solution: (a) Actin filaments and myosin filaments can be differentiated as follows: 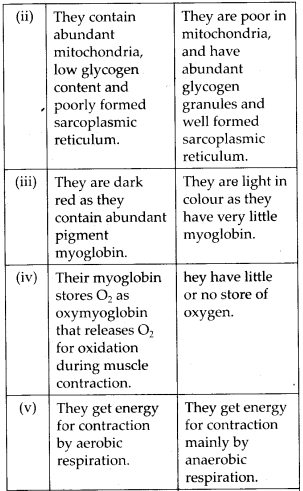 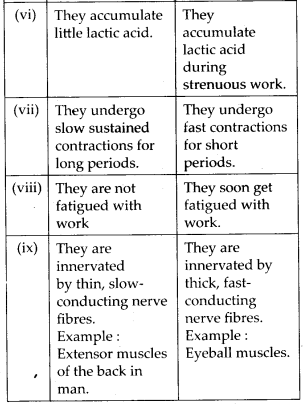 (c) Differences between pectoral and pelvic girdles are given in the following table: 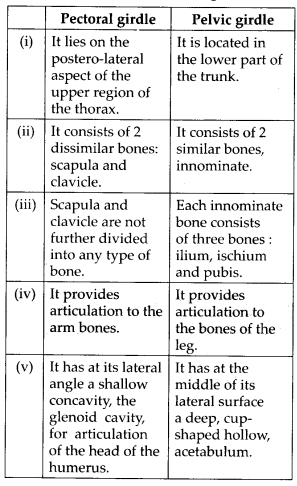 7. What are the different types of movements exhibited by the cells of human body?
Solution: The cells of human body show three types of movements: amoeboid, ciliary and muscular.
Amoeboid movements: These are found in leucocytes of blood and phagocytes of certain body organs. In such cells, movements are brought with the help of temporary finger-like cytoplasmic projections, called pseudopodia or false feet. So it is also called pseudopodial movement. These pseudopodia are formed by flow of cytoplasm, called cyclosis (simplest form of movement), and cytoskeletal structures like microfilaments.
Ciliary movements: Large number of our internal tubular organs are lined by ciliated epithelium. For instance, the cilia of the cells lining the trachea, oviducts and vasa efferentia propel dust particles, eggs and sperms respectively by their coordinated movements in specific directions in these organs. Muscular movements: These are brought about by the action of skeleton, joints and muscles. These are of two types: movements of body parts and locomotion. 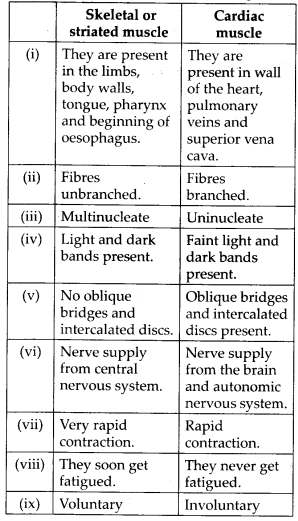