1.’All elements that are present in a plant need not be essential to its survival’. Comment.
Soln. Most of the mineral elements present in the soil enter plants through roots but all of these may not be essential for their survival. Some are absorbed and accumulated by plant only because they are present in excess amount. For example plants growing near nuclear test sites take up strontium, even though it is not required by them. Thus, an essential element is that which is necessary for supporting normal growth and reproduction, its requirement must be specific i.e. its deficiency cannot be met by supplying other element and it must be directly involved in the metabolism of plant.

2.Why is purification of water and nutrient salts so important in studies involving mineral nutrition using hydroponics?
Soln.Impure water and salts contain a large number of soluble minerals and impurities. When such water and salts are used as solution culture for growing plants in hydroponics then the impurities will interfere with the experiment and will not give correct result about the essentiality of a mineral element. Therefore, purified water with defined mineral nutrients are used in hydroponics.

3.Explain with examples:macronutrients, micronutrients, beneficial nutrients, toxic elements and essential elements.
Soln. Macronutrients : Those elements which are generally present in plant tissues in large amounts (in excess of 10 mmole Kg-1 of dry matter) and are involved in the synthesis of organic molecules and development of osmotic potential are called macronutrients or macroelement, e.g. carbon, hydrogen, oxygen, nitrogen, sulphur, potassium, calcium and magnesium etc.
Micronutrients : Those elements which are required by plants in’very small amounts (less than 10 mmole Kg-1 of dry matter) are called micronutrients, e.g. iron, zinc, manganese, boron, copper, molybdenum, chlorine and nickel. These elements are mostly involved in the functioning of enzymes as cofactor or metal activators.
Beneficial nutrients : Those elements which are required by higher plants along with the macro and micronutrients are called beneficial nutrients, e.g. cobalt, silicon, sodium and selenium.
Toxic elements : Any mineral element if supplied to plant tissue in such concentration that it reduces the dry weight of tissues by about 10 percent, is called toxic element. e.g. manganese toxicity leads to the appearance of brown spots surrounded by chlorotic veins. Excess of manganese induces deficiency of iron, magnesium and calcium.
Essential elements : Any element required by living organisms to ensure normal gfbwth, development, maintenance, metabolism and causes deficiency symptoms if not supplied to the plant from external medium is called essential element, e.g. C, H, O, N, P, K, S, Mg, Ca, Mn, Cu, Mo, Zn, B, Cl, etc. Potassium plays an important role in opening and closing of stomata, protein synthesis etc. Magnesium is found in chlorophyll and phosphorus in ATP. Mg2+ is an activator for both ribulose bisphosphate carboxylase-oxygenase and phosphsenol pyruvate carboxylase.Zn2+ is an activator of alcohol dehydrogenase and Mo of nitrogenase during nitrogen metabolism.

5.If a plant shows a symptom which could develop due to deficiency of more than one nutrient, how would you find out experimentally, the real deficient mineral element?
Soln.Deficiency symptoms are first studied by means of pot and culture experiments. Rapidly growing plants which develop characteristic symptoms are used in culture experiments. They are called test (= indicator) plants. They are then grown in soil under test in small pots. The results are compared to know the deficiency elements. Similar tests are performed with selected crops.

7.How are the minerals absorbed by the plants?
Soln. Plants absorb their mineral salt supply from the soil through the roots from the zones of elongation and root hair. The minerals are absorbed as ions which are accumulated by the plants against their concentration in the soil. Plant shows two phases in mineral absorption – initial and metabolic. In the initial phase there is a rapid uptake of ions into outer or free space of the cells (apoplast) that comprises of intercellular spaces and cell walls. Ions absorbed in free space are freely exchangeable, e.g., replacement of unlabelled K+ ions with labelled K+ ions. In the metabolic phase the ions pass into inner space comprising of cytoplasm and vacuole. In the inner space the ions are not freely exchangeable with those of external medium. Entry of ions into outer space is passive absorption as no energy is required for it. Absorption of ions into inner space requires metabolic energy. It is, therefore, an active absorption. Movement of ions into cells is called influx while movement of ions out of the cells is called efflux.

8.What are the conditions necessary for fixation of atmospheric nitrogen by Rhizobiuml What is their role inN2fixation?
Soln.The conditions necessary for nitrogen fixation by Rhizobium are :
(i) Presence of enzyme nitrogenase.
(ii)A protective mechanism for the enzyme nitrogenase against O2
(iii)A non-heme iron protein-ferrodoxin as an electron carrier.
(iv)The hydrogen donating system (viz, pyruvate, hydrogen, sucrose, glucoseetc).
(v) A constant supply of ATP.
(vi)Presence of thiamine pyrophosphate (TPP), coenzyme-A, inorganic phosphate and Mg++ as co-factors.
(vii)Presence of cobalt and molybdenum,
(viii) A carbon compound for trapping
released ammonia.
In the process of biological nitrogen fixation by free living and symbiotic nitrogen fixers, the dinitrogen molecule is reduced step by step to ammonia (NH3) by the addition of pairs of hydrogen atoms. The pyruvic acid mainly serves as an electron donor but in some cases hydrogen, sucrose, glucose, etc., have also been shown to operate. In leguminous plants, the glucose-6-phosphate molecule probably acts as a substrate for donating hydrogen. The overall process occurs in presence of enzyme nitrogenase, which is active in anaerobic condition. The enzyme nitrogenase consists of two sub-units – a non-heme iron protein (or dinitrogen reductase) and an iron molybdenum protein (Mo-Fe protein or dinitrogenase).
The Fe-protein component reacts with ATP and reduces Mo-Fe protein which then converts N2to ammonia. The ammonia is either directly taken by host or is converted to nitrates with the help of nitrifying bacteria (e.g., Nitrosomonas).

9.What are the steps involved in formation of a root nodule?
Soln. Nodule formation involves a sequence of multiple interactions between Rhizobium and roots of the host plant. Main stages in the nodule formation are:
(i) Rhizobia multiply and colonise the surrounding of roots and get attached to epidermal and root hair cells (Figure a).
(ii)The root hair curl and the bacteria invade the root hair.
(iii)An infection thread is produced carrying the bacteria into the inner cortex of the root (Figure b and c).
(iv)The bacteria get modified into rod-shaped bacteroids and cause inner cortical and pericycle cells to divide. Division and growth of cortical and peri cycle cells lead to nodule formation.
(v) The nodule thus formed, establishes a direct vascular connection with the host for exchange of nutrients (Figure d).
(vi)The nodule contains all the necessary biochemical components, such as the enzyme nitrogenase and leghaemoglobin. The enzyme nitrogenase catalyses the conversion of atmospheric nitrogen to ammonia, the first stable product of nitrogen fixation. 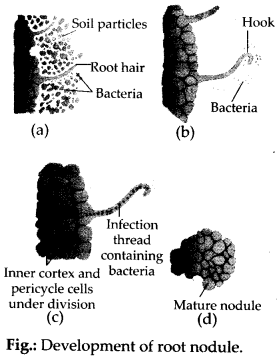