1.What is the basis of classification of algae?
soln. Fritsch (1935), has classified algae considering phylogeny, affinities and inter-relationships of various forms. He classified algae mainly on the basis of the characters like structure of plant body, nature of the pigments, reserve food material, number and position of flagella, chemistry of cell wall and methods of reproduction etc. Algae is divided into 11 classes but among them 3 main classes are Chlorophyceae, Phaeophyceae and Rhodophyceae.

3.Name three groups of plants that bear archegonia. Briefly describe the life cycle of any one of them.
soln. The three groups of plants that bear archegonia are bryophytes, pteridophytes and gymnosperms.
Life cycle of a bryophyte is as follows : The main plant body of bryophyte is gametophytic (n), which is independent and may be thallose (no differentiation in root, stem, leaves) e.g., Riccia, or may be foliose (having leafy axis) e.g., Funaria. The dominant phase in the life cycle of Funaria is the gametophyte, which occurs in two stages, the protonema stage and the erect, leafy gametophytic plant.
The leafy gametophyte consists of an upright, slender axis (stem-like) that bears spirally arranged leaves and is attached to the substratum by multicellular, branched rhizoids. Vegetative reproduction takes place
by fragmentation; by the buds formed in secondary protonema etc. The sex organs, antheridia and archegonia are produced in dusters at the apices of the leafy shoots. Antheridia produces antherozoids and archegonia produces egg. Antherozoid (male gamete) and egg (female gamete) fuses and form zygote.Zygote develops into a sporophyte; which is differentiated into foot, seta and capsule and spores are produced in the capsule.
Spores on reaching a suitable substratum germinate to produce a filamentous juvenile stage, .called the primary protonema, which later produces secondary protonema that forms erect leafy plants. 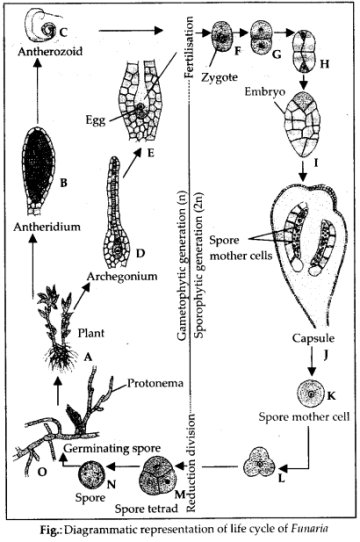 5.Write a note on economic importance of algae and gymnosperms.
soln. Economic importance of algae is as follows:
The group Algae plays both economically beneficial as well as harmful roles.
Beneficial importance :
(i) People of coastal countries have been using sea weeds & certain other algae as source of food, e.g., Porphyra, Ulva, Laminaria, etc.
(ii)Some algae are used as food for marine as well as domestic animals, e.g., Sargassum, Macrocystis.
(iii)Algae are useful source of many commercial products like agar, a jelly like substance (complex polysaccharide) is extracted form species of red algae belonging to the genera Gelidium, Gracilaria etc. Agar is also used as base in culture media. Carrageenin occurs as a cell wall polysaccharide, esterified with sulphate. It is extracted from red alga like Chondrus Crispin, etc. is used in pharmaceutical emulsifier and textile, leather, cosmetic industries. Alginates are salts of alginic acid found in the cell wall of phaeophyceae (brown algae) like Fucus, Laminaria etc.
(iv)Algae are also useful in medicine industry. Antibiotic chlorellin is obtained from Chlorella. Extracts of Cladophora, Lyngbya kill strains of Pseudomonas and Mycobacterium like bacteria. Nitella is used to destroy mosquitoes growth in ponds and hence used in control of malaria.
(v) Some algae are used in agriculture like Nostoc, Anabaena etc. are used to convert atmospheric N2 into nitrogenous compounds which are absorbed by higher plants. Some sea weeds like Fucus, Litlwphyllum, Lycophyllum etc. are rich io K, P, trace elements and growth substances and are used as fertilisers by coastal people.
(vi)Some algae like Chlorella, Chlamydomonas, etc. are used in sewage disposal in ponds. These algae help in bacterial decomposition by providing 02.
(vii)Some algae like Chlorella, Synecoccus, etc are used in space travels. A person inside a spaceship will need a device to get rid of C02 and other body wastes and will require sources of Oz and food. These algae are very useful for this purpose.
(viii)A large amount of iodine (mineral element present in thyroxine hormone of thyroid gland) is extracted from kelps (brown sea weeds or members of phaeophyceae) like Laminaria, Fucus, Ascophyllum etc. Similarly red algae like Rhodomela, Polysiphonia, Rhodymenia are sources of bromine.
Harmful importance:
(i) Some blue green and green algae like Chroococcus, Oscillatoria grow over the surface of water bodies in abundance and cause water bloom. On death and decay these algae give off bad smell. Some algae secrete poisonous or toxic substances.
(ii)Parasitic algae like Cephaleuros virescens causes red rust of tea, coffee etc.
Economic importance of gymnosperms is as follows:
(i)Some species of Cycas like C. revoluta, C. rumphii look like palm tree and are used for decoration purposes as they remain fresh for long period.
(ii)Stem portion of Cycas revoluta is a good source of ‘sago’, a kind of starch used in making bread by poor people. Seeds of some species of Cycas are roasted and taken as food. Young succulent leaves of some species of Cycas are cooked as vegetable.
(iii)Many gymnospersm have medicinal value. The fresh juice extracted from the Cycas circinalis leaves is used as medicine for stomach disorders, blood vomiting and other skin diseases. Pollen grains of some Cycas plants are reported to have some narcotic effect.
(iv)Some gymnosperms like Pinus, Abies, Cedrus are the chief source of various types of woods. The wood of Juniperus is used in making pencils, scales, holders etc.
(v)Some species of Pinus is a good source of turpentine, wood gas, wood alcohol.

7.What is heterospory? Briefly comment on its significance. Give two examples.
soln. The occurrence of two kinds of spores in the same plant is called as heterospory. Among them the smaller spore is called microspore and the larger spore is called megaspore. Heterospory first evolved in pteridophytes. Significance of heterospory
(i) Heterospory is associated with the sexual differentiation of gametophyte /.<?., a microspore develops into a male gametophyte whereas a megaspore develops into a female gametophyte.
(ii)In homosporous pteridophytes spores have to germinate on soil thus face more environmental problems. In heterosporous pteridophytes, spores germinate within the sporangium and the gametophytes are retained inside for variable periods of time. Hence, germinating gametophyte has better chances of survival. This lays the foundation of complete retention of gametophytes within sporophytes in angiosperms and gymnosperms.
(iii)Heterospory is the basis of development of seed habit in higher plants.

8.Explain briefly thefollowing terms with suitable examples.
(i) Protonema (ii) Antheridium
(iii)Archegonium (iv) Diplontic (v) Sporophyll (vi) Isogamy
soln. (i) Protonema : It is the first, usually branched, green and filamentous structure produced by a germinating moss or fern spore. The protonema of mosses bears buds that develop into the gametophyte plant. In fern the protonema becomes the prothallus.
(ii)Antheridium : The male sex organ of cryptogams (algae, fungi, bryophytes and
pteridophytes) is known as antheridium. It produces the male gametes or anthero- zoids. It may consist of a single cell or it may have a wall that is made up of one or several layers forming a sterile jacket around the developing gametes.
(iii)Archegonium : The multicellular flask shaped female sex organ of bryophytes, pteridophytes and many gymnosperms is known as archegonium. Its dialated base called the venter contains the female gamete or egg or oosphere. The cells of the narrow neck of archegonium liquify to allow the male gametes to swim towards the oosphere.
(iv)Diplontic : It is the kind of life cycle in which the diploid sporophyte is dominant and this diploid phase is photosynthetic. The gametophytic phase is represented either by gametes only, that are formed through meiosis or by a highly reduced few celled gametophyte. E.g., all seed-bearing plants (gymnosperms and angiosperms).
(v) Sporophyll : It is a type of leaf bearing sporangia. In ferns, the sporophylls are the normal foliage leaves, but in other plants the sporophylls are modified and arise in specialised structure such as the strobili of club-moss, gymnosperms and the flower of angiosperms. In most plants sporophylls are of two types – microsporophylls and megasporophylls.
(vi)Isogamy: It is a type of sexual reproduction where fusion takes place between two identical gametes. The gametes are similar in size and structure and they show equal motility during sexual reproduction, e.g., Spirogyra (algae).

(ii) The differences between homosporous and heterosporous pteridophytes are as follows:

(iii) The differences between liverworts and mosses are as follows :

(iv) The differences between syngamy and triple fusion are as follows :

10.How would you distinguish monocots from dicots?
Soln. Differences between monocots and dicots are as follows : 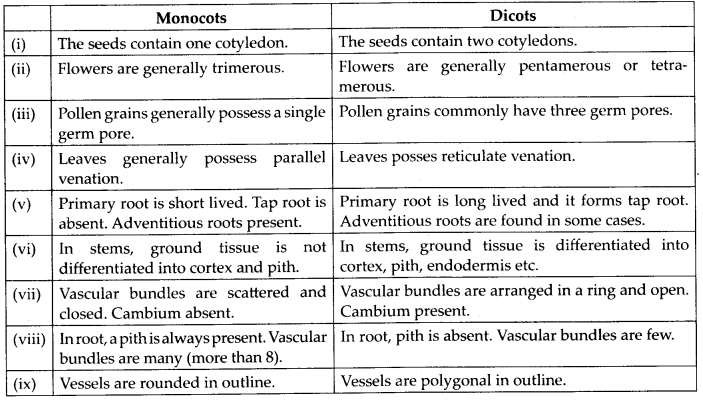