Topics and Subtopics in NCERT Solutions for Class 11 Biology Chapter 14 Respiration in Plants:

1. Give the schematic representation of an overall view of Krebs’ cycle.
Solution: 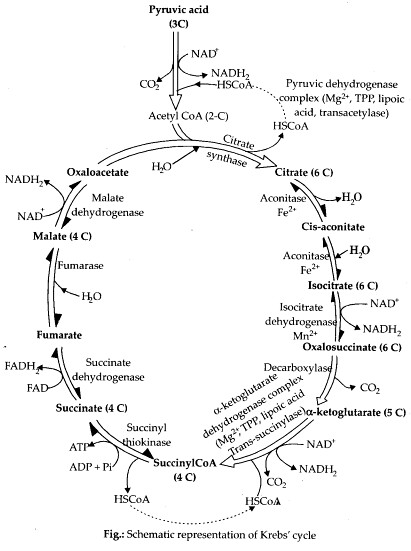 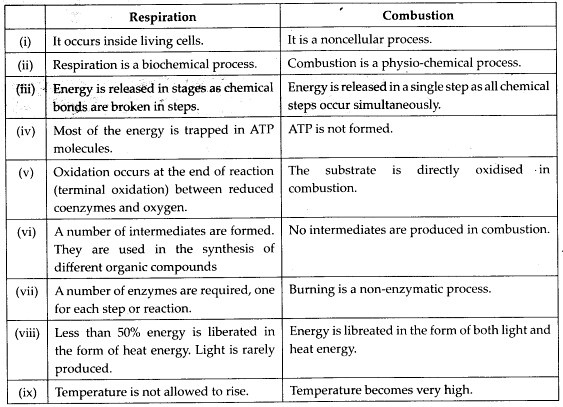 (b) Differences between glycolysis and Krebs’ cycle are as follows: 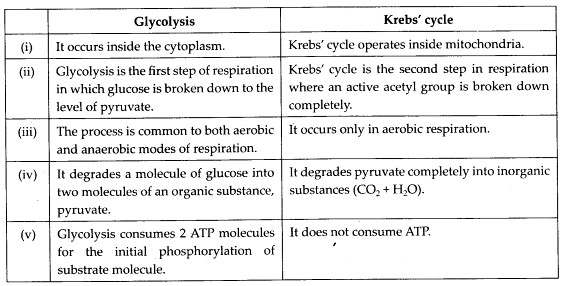 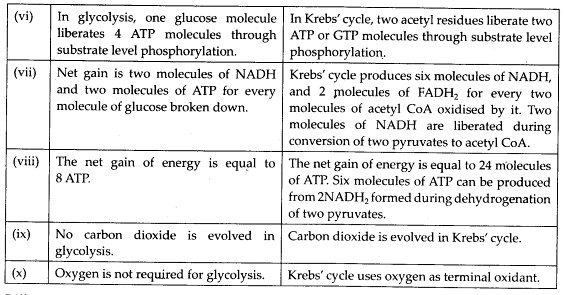 (C)Differences between aerobic respiration and fermentation are as follows: 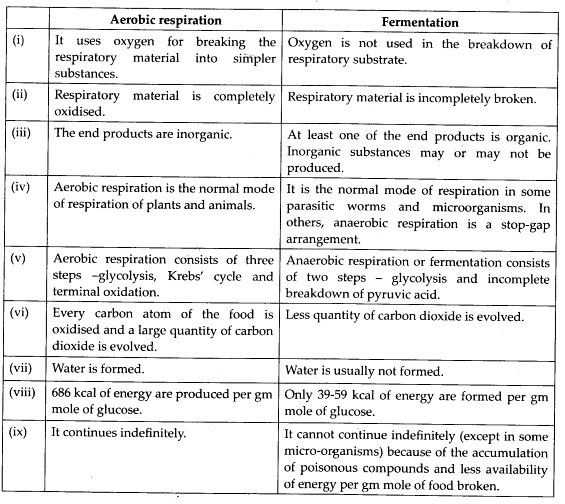 4. Give the schematic representation of glycolysis.
Solution: 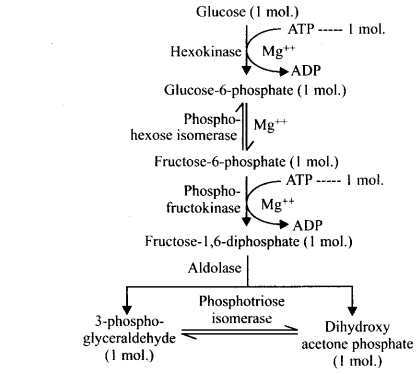 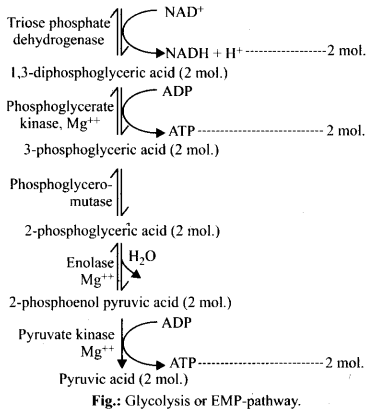 5. Explain ETS.
Solution: An electron transport chain or system (ETS) is a series of coenzymes and cytochromes that take part in the passage of electrons from
a chemical to its ultimate acceptor. Reduced coenzymes participate in electron transport chain. Electron transport takes place on cristae of mitochondria [oxysomes ( F0 -F1 , particles) found on the inner surface of the membrane of mitochondria]. NADH formed in glycolysis and citric acid cycle are oxidised by NADH dehydrogenase (complex I) and the electrons are transferred to ubiquinone. Ubiquinone also receives reducing equivalents via FADH2 through the activity of succinate dehydrogenase (complex II). The reduced ubiquinone is then oxidised by transfer of electrons of cytochrome c via cytochrome Fc, complex (complex III). Cytochrome c acts as a mobile carrier between complex III and complex IV. Complex IV refers to cytochrome c oxidase complex containing cytochromes a and  a3and two copper centres. When the electrons are shunted over the carriers via complex I to IV in the electron transport chain, they are coupled to ATP synthetase (complex V) for the formation of ATP from ADP and Pi. Oxygen functions as the terminal acceptor of electrons and is reduced to water along with the hydrogen atoms. Reduced coenzymes (coenzyme I, II and FAD) do not combine directly with the molecular O2. Only their hydrogen or electrons are transferred through various substances and finally reach O2. The substances useful for the transfer of electron are called electron carriers. Only electrons are transferred through cytochromes (Cyt F1 Cyt c,,C2, a,  a3) and finally reach molecular O2. Both cytochrome a and a3 form a system called cytochrome oxidase. Copper is also present in Cyt  a3 in addition to iron. The molecular oxygen that has accepted electrons now receives the protons that were liberated into the surrounding medium to give rise to a molecule of water. The liberated energy is utilised for the synthesis of ATP from ADP and Pi.

But these kind of assumptions are not really valid in a living system; all pathway work simultaneously and do not take place one after another; substrates enter the pathways and are withdrawn from it as and when necessary; ATP is utilised as and when needed; enzymatic rates are controlled by multiple means. Hence, there can be a net gain of 36 ATP molecules during aerobic respiration of one molecule of glucose.

(b) Differences between glycolysis and fermentation are as follows:

10. Define RQ. What is its value for fats?
Solution: Respiratory quotient (RQ) is the ratio of the volume of carbon dioxide produced to the volume of oxygen consumed in respiration over a period of time. Its value can be one, zero, more than 1 or less than one.

11. What is oxidative phosphorylation?
Solution: Oxidative phosphorylation is the synthesis of energy rich ATP molecules with the help of energy liberated during oxidation of reduced co-enzymes (NADH, FADH2) produced in respiration. The enzyme required for this synthesis is called ATP synthase. It is considered to be the fifth complex of electron transport chain. ATP synthase is located in FT or head piece of F0 -F1 or elementary particles. The particles are present in the inner mitochondrial membrane. ATP synthase becomes active in ATP formation only where there is a proton gradient having higher concentration of H+ or protons on the F0 side as compared to F x side (chemiosmotic hypothesis of Peter Mitchell).
Increased proton concentration is produced in the outer chamber or outer surface of inner mitochondrial membrane by the pushing of proton with the help of energy liberated by passage of electrons from one carrier to another. Transport of the electrons from NADH over ETC helps in pushing three pairs of protons to the outer chamber while two pairs of protons are sent outwardly during electron flow from FADH2. The flow of protons through the F0 channel induces F1 particle to function as ATP-synthase. The energy of the proton gradient is used in attaching a phosphate radical to ADP by high energy bond. This produces ATP. Oxidation of one molecule of NADH2 produces 3 ATP molecules while a similar oxidation of FADH2 forms 2 ATP molecules.

12. What is the significance of step-wise release of energy in respiration?
Solution: The utility of step-wise release of energy in respiration are given as follows :
(i) There is a step-wise release of chemical bond energy which is very easily trapped in forming ATP molecules.
(ii) Cellular temperature is not allowed to rise.
(iii) Wastage of energy is reduced.
(iv) There are several intermediates which can be used in production of a number of biochemicals.
(v) Through their metabolic intermediates different substances can undergo respiratory catabolism.
(vi) Each step of respiration is controlled by its own enzyme. The activity of different enzymes can be enhanced or inhibited by specific compounds.
This helps in controlling the rate of respiration and the amount of energy liberated by it.