Question 3.
Why did knights become a distinct group and when did they decline?
Answer:
There were frequent localized wars in Europe during 9th century. Soldiers were not enough. Good cavalry was the need of hour. It led to the growing importance of a new section of people, i.e. the knights. They were linked to the lords. The lord gave the knight a piece of land that was called fief. Land of the fief was cultivated by peasants. In lieu of that, the knight paid his lord a regular fee and also promised to fight for him in war. In this way, they became a distinct group. The fall of feudalism was one of the main reasons of the decline of knights during 15th century.

Question 5.
Imagine and describe a day in the life of a craftsman in a medieval French town.
Answer:
Students are advised to answer this question with the help of their teachers. Following guidelines are given to complete this task:

Question 6.
Compare the conditions of life for a French serf and a Roman slave.
Answer:
French Serfs: They cultivated land that mainly belonged to the lord. Most of the produce from these land was given to the lord.

Question 2.
The clergy was considered to be the most important in medieval European social order. What were the reasons?
Ans. There are a few reasons of this:

Question 4.
What do you understand by Labour Rent?
Answer:
In the estate of the lords, the serfs had to work along with his family members for at least 3 or more days. Income generated from this labour is known as Labour Rent.

Question 5.
What was Tithe ?
Answer:
Tithe was a kind of tax collected by the church from the peasants in France. It was 1/10th of the total produce.

Question 6.
What do you know about Friars?
Answer:
Friars were a group of monks who moved from place to place, preaching to the people and living on earth.

Question 7.
What was Taille?
Answer:
Taille was a kind of tax collected by the kings from the peasants.

Question 9.
What were the duties of the serfs?
Answer:

Question 14.
What was Manar?
Answer:
Fertile lands were called Manar.

Question 19.
What were the causes of the growth of towns in Europe during the middle age?
Answer:

Question 20.
What do you understand by vassalage?
Answer:
In society, priests were put in the first order and nobles in the second order. The nobility enjoyed privileges in the social process. They had complete control over the land. This control was the outcome of the Vassalage’ practice.

Question 1.
Describe the life of Christian monks in a monastery during the medieval period of Europe.
Answer:
The men who led the life of self-denial and self-control were called monks. The monks lived in monastery and led the simple life. They had to take a vow not to acquire any kind of worldly possession. They were not allowed to marry and had to take a vow to obey the chief of monastery. Their only mission in life was to pray and preach and to spread moral teachings among the common people.

Question 2.
What do you understand by manor? Describe in brief.
Answer:
The noble enjoyed a special status in the society. He had a complete control over his property. He was the lord of all the people settled on his land. He occupied vast tracts of land which had its own dwellings, private fields, and pastures. His house was called manor. Peasants cultivated his private lands. Whenever required in battle they were also expected to act as foot soldiers.

Question 4.
What was the position of Pope in the medieval Europe?
Answer:
The Pope enjoyed a respectable position in the society during the medieval period in Europe. He was considered to be the spiritual representative of Jesus Christ. He interfered into the internal affairs of the Christian kings and their subjects. Nobody could dare to challenge the authority of Pope.

Demerits of the feudal system:

Question 7.
How did plague affect trade and cities?
Answer:

Question 8.
Why did the rich people donate their money to churches?
Answer:
The rich people donated their money to churches. The large churches were known as cathedrals. They were being built in France and belonged to monasteries. Different groups of people gave their immense contribution by their labour, materials and money for their construction. It took many years in its completion. After its completion, they became centers of pilgrimage.

Question 9.
What do you understand by Guild?
Answer:
Guild was the basis of economic organisation. Each craft or industry was organised into a guild. It was also an association. Quality of the product, sale and its price were controlled by the Guild. The Guild hall was the distinct feature of every town. In it, the heads of all trade organisations formally met. Guards patrolled the town walls and musicians were called to play at feasts and in civic processions. Innkeepers looked after travelers.

Question 11.
Knights became a distinct group under medieval European society. Why?
Answer:
From the 9th century, there were frequent localized wars among different factions. Amateur soldiers were not sufficient. There was the need of good cavalry. Thereafter, a new section of people-the Knights grew. They were linked with the lords. The lord gave the knight a piece of land, i.e. fief. It extended between 1,000 and 2,000 acres or more. It also comprised a house for the knight and his family, a church and other establishments to house his dependents.

The knight paid his lord a regular fee and promised for him to fight in war. In this way, the knights became a distinct group in the medieval European society.

Demerits of the medieval monasteries:

Question 13.
Discuss the impact of environment on European agriculture.
Answer:
The entire Europe was covered with huge and dense forests between fifth to tenth centuries. It was but natural that there was less land available for agriculture. The conditions of peasants were miserable. Now they started to take refuge in the forest. There was cold climatic condition in entire Europe. The yield of the crops reduced to a large extent. But in 11th century, climatic conditions of Europe changed. It entered into a warm phase. Average temperatures increased. It had a huge impact on agriculture. There was longer growing seasons for the agriculturists. Fertility of the soil also increased and hence, the production naturally increased.

Question 16.
Discuss the growth of town after the decline of Roman empire.
Answer:
After the decline of Roman empire, the towns were completely destroyed. Most of the ancient Roman towns bore a deserted look. With the increase of agriculture the largest portion of population depended on agriculture. Towns began to flourish again. To sell their grains, the peasants now needed a place. They also needed a place where they could buy tools and clothes. Consequently, it led to the growth of small towns, churches, roads, etc.

Question 17.
Agricultural technology was very primitive. Why?
Answer:
In the very beginning, agricultural technology was rather primitive. There was only an alternative of wooden plough, drawn by a team of oxen for the peasants. Wooden plough could only scratch the surface of the earth. So, agricultural produce was not upto the mark. It was also labour intensive. Fields could be dug only once in four years. Crop rotation method was not effective. Land was divided into two parts; on one part, winter wheat was planted while other part was left fallow. As a result, soil deteriorated slowly. Famines were natural phenomena. Frequent famines led to the miserable life for the poor. In this way, we can say that agricultural policy was rather primitive.

Question 19.
Discuss the causes of the development of cities in medieval Europe.
Answer:

As a result, there was an immediate increase in the amount of food produced from each unit of land. Food production almost doubled. There were better opportunities for cultivators. They could now produce more food for less land. The average size of peasants’ farm shrank from about 100 acres to 20 to 30 acres. As a result of holding, smaller lands could be more efficiently cultivated. It also reduced the amount of labour. The new technological changes cost a lot of money.

Question 7.
Discuss in detail about the emergence of cathedrals.
Answer:
From 12th century, large churches were built in France. They were known as cathedrals. These belonged to monasteries. Various groups of people contributed a lot to their construction in the form of labor, material and money. Along with it, the rich merchants also spent money by making donations to churches. Cathedrals took many years in their completion. After their completion, they became the centers of pilgrimage. Small towns also grew a lot. The specialty of the design of cathedrals was that the voice of priest could be clearly heard within the hall where a number of people gathered. Their voice could be heard even from a far off distance.

For windows stained glass was used. During the day, the sunlight would make them radiant for people inside the cathedral, and after sunset the light candles would make them visible to people outside. The stained glass windows narrated the stories in the Bible through pictures, which even the illiterate people could read 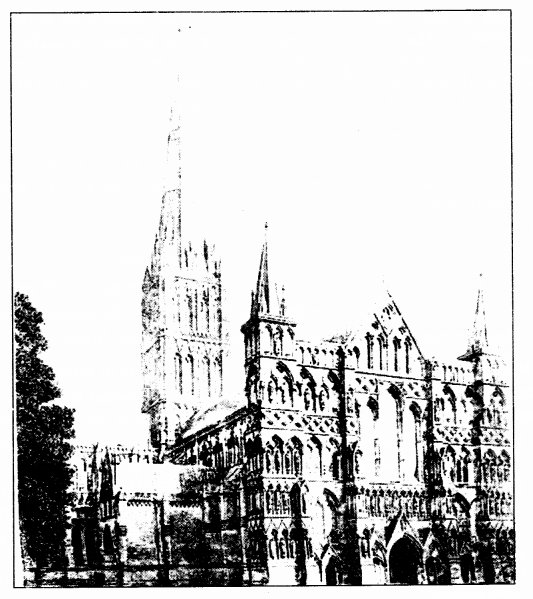 Class 11 History Chapter 3 Passage Based Questions
Read the following passages and answer the questions that follow:

In Benedictine monasteries, there was a manuscript with 73 chapters of rules which were followed by monks for many centuries. Here are some of the rules they had to follow:
Chapter – 6 : Permission to speak should rarely be granted to monks.
Chapter – 7 : Humility means obedience.
Chapter – 33:No monk should own private property.
Chapter – 47: Idleness is the enemy of the soul, so friars and sisters should be occupied at certain times in manual labour, and at fixed hours in sacred reading. Chapter-48:The monastery should be laid out in such a way that all necessities be found within its bounds: water, mill, garden, workshops.

Questions:
1. What does humility’ mean?
2. What does chapter 47 say?
3. What sort of values are reflected in this chapter?
Answers:
1. Humility means obedience.

2. Chapter 47 says that idleness is the enemy of the soul, so friars and sisters should be occupied at certain times in manual labour and at fixed hours in a sacred reading.

We also caused to be painted, by the exquisite hands of many masters from different regions, a splendid variety of new windows… Because these windows are very valuable on account of their wonderful execution and the profuse expenditure of painted glass and sapphire glass, we appointed an official master craftsman for their protection, and also a goldsmith—who would receive their allowances, namely, coins from the altar and flour from the common storehouse of the brethren, and who would never neglect their duty to look after these

2. Windows were precious on account of their wonderful execution and the profuse expenditure of painted glass and sapphire glass.

3. A goldsmith would receive their allowances. 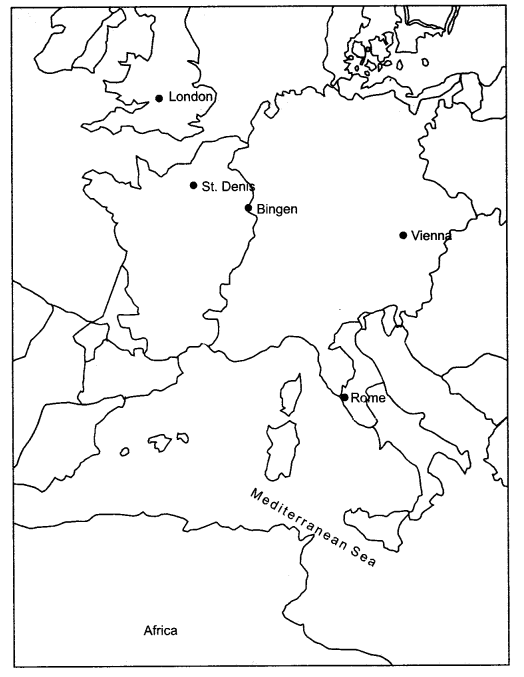