NCERT Solutions for Class 12 Chemistry Chapter 1 The Solid State is designed and prepared by the best teachers across India. All the important topics are covered in the exercises and each answer comes with a detailed explanation to help students understand concepts better. These NCERT solutions play a crucial role in your preparation for all exams conducted by the CBSE, including the JEE.

Topics and Subtopics in NCERT Solutions for Class 12 Chemistry Chapter 1 The Solid State:

1.1. Why are solids rigid?
Ans: The constituent particles in solids have fixed positions and can oscillate about their mean positions. Hence, they are rigid.

1.4. Why is glass considered as super cooled liquid ? (C.B.S.E. Delhi 2013)
Ans: Glass is considered to be super cooled liquid because it shows some of the characteristics of liquids, though it is an amorphous solid. For example, it is slightly thicker at the bottom. This can be possible only if it has flown like liquid, though very slowly.

1.5. Refractive index of a solid is observed to have the same value along all directions. Comment on the nature of this solid. Would it show cleavage property?
Ans: As the solid has same value of refractive index along all directions, it is isotropic in nature and hence amorphous. Being amorphous solid, it will not show a clean cleavage and when cut, it will break into pieces with irregular surfaces.

1.7. Solid A is a very hard electrical insulator in. solid as well as in molten state and melts at extremely high temperature. What type of solid is it?
Ans: It is a covalent or network solid.

1.9. What type of solids are electrical conductors, malleable and ductile?
Ans: Metallic solids

Since there are four atoms per unit cell, the cubic unit cell must be face centred (fcc) or cubic close packed (ccp).

1.19. What type of defect can arise when a solid is heated? Which physical property is affected by it and in what way?
Ans: When a solid is heated, vacancy defect is produced in the crystal. On heating, some atoms or ions leave the lattice site completely, i.e., lattice sites become vacant. As a result-of this defect, density of the substances decreases.

1.20. What types of stoichiometric defects are shown by (C.B.S.E. Delhi 2013)
(i) ZnS
(ii) AgBr?
Ans:
(i) ZnS crystals may show Frenkel defects since the cationic size is smaller as compared to anionic size.
(ii) AgBr crystals may show both Frenkel and Schottky defects.

1.22. Ionic solids, which have anionic vacancies due to metal excess defect, develop colour. Explain with the help of a suitable example.
Ans: Let us take an example of NaCl. When NaCl crystal is heated in presence of Na vapour, some Cl–ions leave their lattice sites to combine with Na to form NaCl. The e-1 s lost by Na to form Na+ (Na+ + Cl–—> NaCl) then diffuse into the crystal to occupy the anion vacancies. These sites are called F-centres. These e-s absorb energy from visible light, get excited to higher energy level and when they fall back to ground state, they impart yellow colour to NaCl crystal.

1.1. Define the term ‘amorphous’. Give a few examples of amorphous solids.
Sol. Amorphous solids are those substances, in which there is no regular arrangement of its constituent particles, (i.e., ions, atoms or molecules). The arrangement of the constituting particles has only short-range order, i.e., a regular and periodically repeating pattern is observed over short distances only, e.g., glass, rubber, and plastics.

1.2. What makes glass different from a solid such as quartz? Under what conditions could quartz be converted into glass?
Sol. Glass is a supercooled liquid and an amorphous substance. Quartz is the crystalline form of silica (SiO2) in which tetrahedral units SiO4 are linked with each other in such a way that the oxygen atom of one tetrahedron is shared with another Si atom. Quartz can be converted into glass by melting it and cooling the melt very rapidly. In the glass, SiO4 tetrahedra are joined in a random manner.

1.5. How can you determine the atomic mass of an unknown metal if you know its density and dimensions of its unit cell ? Explain your answer. (C.B.S.E. Outside Delhi 2011)
Sol. 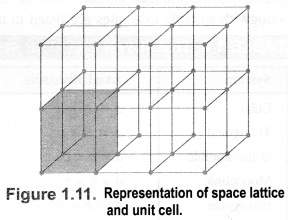 Unit cell: Each bricks represents the unit cell while the block is similar to the space or crystal lattice. Thus, a unit cell is the fundamental building block of the space lattice.
(c) Tetrahedral void: A tetrahedral void is formed when triangular void made by three spheres of a particular layer and touching each other. Octahedral void: An octahedral void or site is formed when three spheres arranged at the corners of an equilateral triangle are placed over anothet set of spheres. 1.9 Explain:
(i) The basis of similarities and differences between metallic and ionic crystals.
(ii) Ionic solids are hard and brittle.
Sol. (i) Metallic and ionic crystals
Similarities:
(a) There is electrostatic force of attraction in both metallic and ionic crystals.
(b) Both have high melting points.
(c) Bonds are non-directional in both the cases.
Differences:
(a) Ionic crystals are bad conductors of electricity in solids state as ions are not free to move. They can conduct electricity only in die molten state or in aqueous solution. Metallic crystals are good conductors of electricity in solid state as electrons are free to move.
(b) Ionic bond is strong due to strong electrostatic forces of attraction.
Metallic bond may be strong or weak depending upon the number of valence electrons and the size of the kernels.
(ii) Ionic solids are hard and brittle.Ionic solids are hard due to the presence of strong electrostatic forces of attraction. The brittleness in ionic crystals is due to the non- directional bonds in them.

1.10 Calculate the efficiency of packing in case of a metal crystal for (i) simple cubic, (ii) body centred cubic, and (iii) face centred cubic (with the assumptions that atoms are touching each other).
Sol. Packing efficiency: It is the percentage of total space filled by the particles. 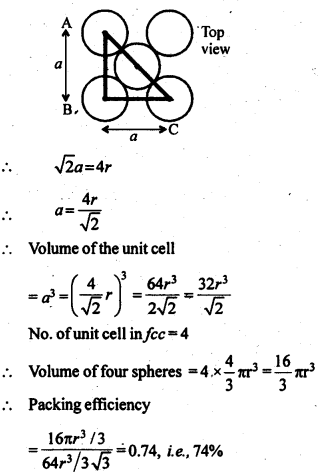 1.12. A cubic solid is made of two elements P and Q. Atoms Q are at the corners of the cube and P at the body centre. What is the formula of the compound ? What is the co-ordination number of P and Q?
Sol. Contribution by atoms Q present at the eight corners of the cube = (frac { 1 }{ 8 } )= x 8 = 1
Contribution by atom P present at the body centre = 1
Thus, P and Q are present in the ratio 1:1.
∴ Formula of the compound is PQ.
Co-ordination number of atoms P and Q = 8. 1.15 Copper crystallises into a fee lattice with edge length 3.61 x 10-8 cm. Show that the calculated density is in agreement with its measured value of 8.92 gcm-3.
Sol.

This calculated value of density is closely in agreement with its measured value of 8.92 g cm3.

Question 17.
What are semi-conductors? Describe the two main types of semiconductors and contrast their conduction mechanisms.
Solution:
Semi-conductors are the substances whose conductivity lies in between those of conductors and insulators. The two
main types of semiconductors are n-type and p-type.
(i) n-type semiconductor: When a silicon or germanium crystal is doped with group 15 element like P or As, the dopant atom forms four covalent bonds like Si or Ge atom but the fifth electron, not used in bonding, becomes delocalised and continues its share towards electrical conduction. Thus silicon or germanium doped with P or As is called H-type semiconductor, a-indicative of negative since it is the electron that conducts electricity.

(ii) p-type semiconductor: When a silicon or germanium is doped with group 13 element like B or Al, the dopant is present only with three valence electrons. An electron vacancy or a hole is created at the place of missing fourth electron. Here, this hole moves throughout the crystal like a positive charge giving rise to electrical conductivity. Thus Si or Ge doped with B or Al is called p-type semiconductor, p stands for positive hole, since it is the positive hole that is responsible for conduction.

Question 18.
Non-stoichiometric cuprous oxide, Cu2O can be prepared in laboratory. In this oxide, copper to oxygen ratio is slightly less than 2:1. Can you account for the fact that this substance is a p-type semiconductor?
Solution:
The ratio less than 2 : 1 in Cu20 shows cuprous (Cu+) ions have been replaced by cupric (Cu2+) ions. For maintaining electrical neutrality, every two Cu+ ions will be replaced by one Cu2+ ion thereby creating a hole. As conduction will be due to the presence of these positive holes, hence it is a p-type semiconductor.

Question 20.
Classify each of the following as being either a p-type or n-type semiconductor :

Question 22.
In terms of band theory, what is the difference

Solution:
In most of the solids and in many insulating solids conduction takes place due to migration of electrons under the influence of electric field. However, in ionic solids, it is the ions that are responsible for the conducting behaviour due to their movement.

(i) In metals, conductivity strongly depends upon the number of valence electrons available in an atom. The atomic orbitals of metal atoms form molecular orbitals which are so close in energy to each other, as to form a band. If this band is partially filled or it overlaps with the higher energy unoccupied conduction band, then electrons can flow easily under an applied electric field and the metal behaves as a conductor.

If the gap between valence band and next higher unoccupied conduction band is large, electrons cannot jump into it and such a substance behaves as insulator.

Solution:
(i) Schottky defect : In Schottky defect a pair of vacancies or holes exist in the crystal lattice due to the absence of equal number of cations and anions from their lattice points. It is a common defect in ionic compounds of high coordination number where both cations and anions are of the same size, e.g., KCl, NaCl, KBr, etc. Due to this defect density of crystal decreases and it begins to conduct electricity to a smaller extent.

(ii) Frenkel defect : This defect arises when some of the ions in the lattice occupy interstitial sites leaving lattice sites vacant. This defect is generally found in ionic crystals where anion is much larger in size than the cation, e.g., AgBr, ZnS, etc. Due to this defect density does not change, electrical conductivity increases to a small extent and there is no change in overall chemical composition of the crystal.

(iv) F-Centres : These are the anionic sites occupied by unpaired electrons. F-centres impart colour to crystals. The colour results by the excitation of electrons when they absorb energy from the visible light falling on the crystal.

(ii) Paramagnetic substances : Substances which are weakly attracted by the external magnetic field are called paramagnetic substances. The property thus exhibited is called paramagnetism. They are magnetised in the same direction as that of the applied field. This property is shown by those substances whose atoms, ions or molecules contain unpaired electrons, e.g., O2, Cu2+, Fe3+, etc. These substances, however, lose their magnetism in the absence of the magnetic field.

(v) 13-15 group compounds: When the solid-state materials are produced by a combination of elements of groups 13 and 15, the compounds thus obtained are called 13-15 compounds. For example, InSb, AlP, GaAs, etc.

12-16 group compounds: Combination of elements of groups 12 and 16 yields some solid compounds which are referred to like 12-16 compounds. For example, ZnS, CdS, CdSe, HgTe, etc. In these compounds, the bonds have an ionic character.