NCERT Solutions for Class 12 Chemistry Chapter 10 Haloalkanes and Haloarenes is designed and prepared by the best teachers across India. All the important topics are covered in the exercises and each answer comes with a detailed explanation to help students understand concepts better. These NCERT solutions play a crucial role in your preparation for all exams conducted by the CBSE, including the JEE.

Topics and Subtopics in NCERT Solutions for Class 12 Chemistry Chapter 10 Haloalkanes and Haloarenes: 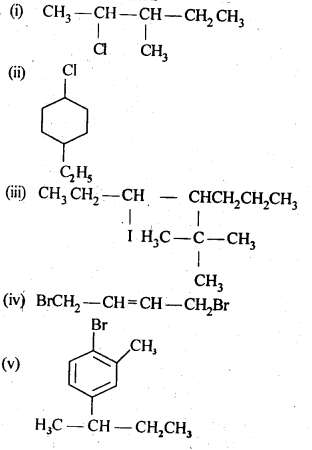 10.2. Why is sulphuric acid not used during the reaction of alcohols with KI?
Ans: KI is expected to give HI on reacting with  H2SO4 which will convert alcohols (R – OH) to alkyl iodides (R – I). However,  H2SO4 is a strong oxidising agent and it oxidises HI formed during the reaction to I2 which does not react with alcohol.

To solve the problem, H2S04 is replaced by phosphoric acid (H3P04) which provides HI for the reaction and does not give I2 as is done by H2S04.

10.3. Write structures of different dihalogen derivatives of propane.
Ans: Four isomers are possible. These are : 10.5. Draw the structures of major monohalo products in each of the following reactions: (ii) The same criteria is followed in this case. We all know that the branching of the carbon atom chain decreases the size of the isomer and this decreases its boiling point as compared to straight chain isomer. The increasing order of boiling point is :
(CH3)2CHCl (isopropylchloride or 2-chloropropane) < ClCH2CH2CH3 (1-chloropropane) < ClCH2CH2CH2CH3 (1-chlorobutane)

10.7. Which alkyl halide from the following pairs would you expect to react more rapidly by an SN2 mechanism? Explain your answer. 10.8. In the following pairs of halogen compounds, which compound undergoes faster SN1 reaction? 10.4. Which one of the following has the highest dipole moment?
(i)CH3CI2 (ii) CHCl3 (iii) CCI4
Ans: The three dimensional structures of the three compounds along with the direction of dipole moment in each of their bonds are given below: 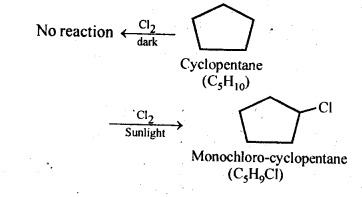 10.6. Write the isomers of the compound having formula C4H9Br.
Ans: It can attack through carbon to form cyanide and through N to form is O cyanide.

10.10. Predict all the alkenes that would be formed by dehydrohalogenation of the following halides with sodium ethoxide in ethanol and identify the major alkene:
(I) 1-Bromo-l-methylcyclohexane
(ii) 2-Chloro-2-methylbutane.
(iii) 2,2,3-Trimethyl-3-bromopentane.
Ans: 10.11. How will you bring about the following conversions?
(I) Ethanol to but-l-yne.
(ii) Ethane to bromoethene
(iii) Propene to 1-nitropropane
(iv) Toluene to benzyl alcohol
(v) Propene to propyne
(vi) Ethanol to ethyl fluoride
(vii) Bromomethane to propanone
(viii) But-l-ene to but-2-ene
(ix) 1-Chlorobutane to n-octane
(x) Benzene to biphenyl
Ans: 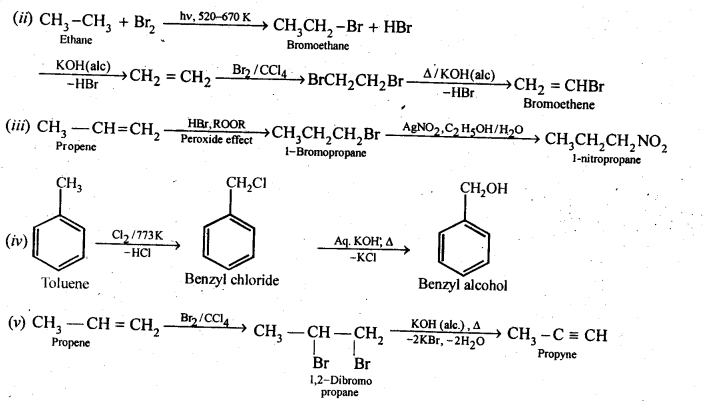 (iii)Grignard reagents are very reactive. They react with moisture present in the apparatus to form alkanes

Thus, Grignard reagents must be prepared under anhydrous conditions.

10.13. Give the uses of freon 12, DDT, carbon tetrachloride, and iodoform.
Ans: Iodoform: It was earlier used as an antiseptic but the antiseptic properties are due to the liberation of free iodine and not due to iodoform itself. Due to its objectionable smell, it has been replaced by other formulations containing iodine.
Carbon tetrachloride:
Uses:
(i)As an industrial solvent for oil, fats, resins etc.and also in dry cleaning.
(ii)CCl4 vapours are highly non-inflammable, thus CCl4 is used as a fire extinguisher under the name pyrene.
(iii)Used in the manufacture of refrigerants and propellants for aerosol cans.
Freons: Freon-12 (CCl2F2) is most common freons in industrial use.
Uses: For aerosol propellants, refrigeration, and air conditioning purposes.
DDT (p -p’ – Dichloro diphenyl – trichloro ethane):
(i)The use of DDT increased enormously on a worldwide basis after World War II, primarily because of its effectiveness against the mosquitoes that spreads malaria and other insects which damages crops.

(ii) However, problems related to extensive use of DDT began to appear in the late 1940 s. Many species of insects developed resistance to DDT, it was also discovered to have a high toxicity towards fishes. DDT is not metabolised very rapidly by animals, instead, it is deposited and stored in the fatty tissues. If the ingestion continues at a steady rate, DDT builds up within the animal’s overtime.

10.14. Write the structure of the major organic product in each of the following reactions: 10.15. Write the mechanism of the following reaction:

Ans: KCN is a resonance hybrid of the following two contributing structures:

Thus, CN–  ion is an ambident nucleophile. Therefore, it can attack the “carbon atom of C-Br bond in n-BuBr either through C or N. Since C – C bond is stronger than C – N bond, therefore, attack occurs through C to form n-butyl cyanide. 10.17. Out of C6H5CH2Cl and C6H5CHCIC6H5which is more easily hydrolysed by aqueous KOH.
Ans: C6H5CH2Cl is 10 aryl halide while C6H5CH(CI)C6H5 is a 2° aryl halide. In SN1 reactions, the reactivity depends upon the stability of carbocations.

10.18. p-dichlorobenzene has higher m.p. and lesser solubility than those of o-and m-isomers. Discuss. (C.B.S.E. Delhi 2013)
Ans: The three isomers are position isomers which differ in the relative positions of the chlorine atoms in the ring :

As we know, p-isomer is more symmetrical as compared to the other isomers. This means that in the crystal lattice, molecules of the p-isomers are more closely packed as compared to the other isomers. As a result, it has a higher melting point and lower solubility as compared to ortho and meta isomers.
Haloarenes are less polar than haloalkanes and are insoluble in water. This is because of lack of hydrogen bonding. As a result, the attractive forces in haloarenes—water system remain less than the attractive forces in H20 molecules which are hydrogen bonded. Haloarenes are soluble in organic solvents of low polarity such as benzene, ether, chloroform, carbon tetrachioride etc. 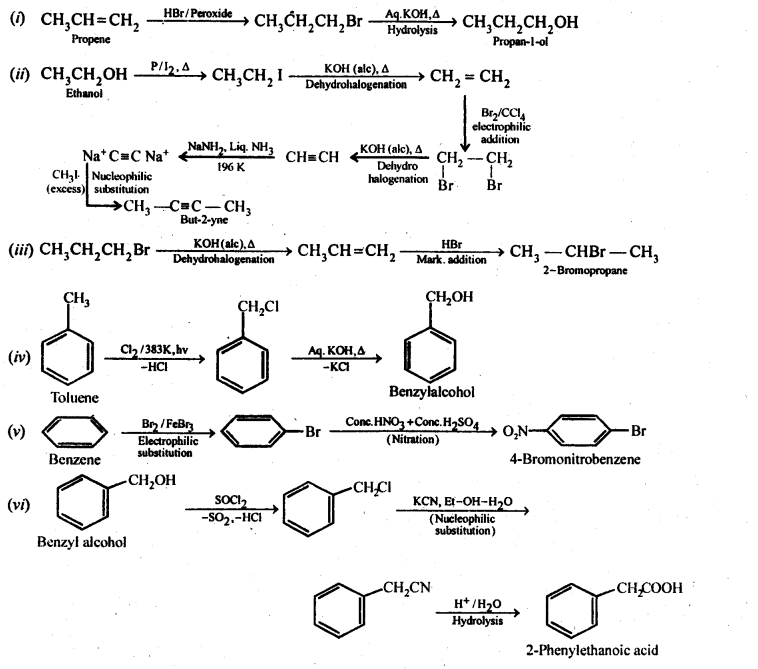 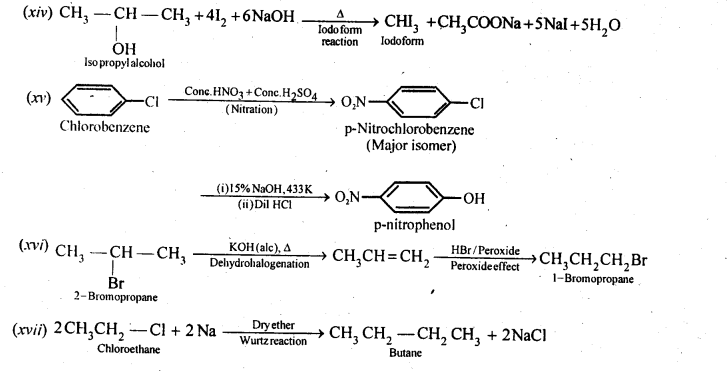 10.20. The treatment of alkyl chlorides with aqueous KOH leads to the formation of alcohols but in presence of alcoholic KOH, alkenes are major products. Explain. (Pb. Board 2009, Haryana Board 2013)
Answer:
In aqueous medium i.e., water, KOH will be completely dissociated to give OH– ions. They being a strong nucleophile, will bring about the substitution of alkyl halides to form alcohols. At the same time, the OH” ions will be highly hydrated also. They will not be able to abstract a proton (H+) from the p-carbon atom to form alkenes. In other words, in aqueous medium, OH– ions will behave as weak base and elimination leading to alkenes will not be feasible.
In alcoholic KOH, the solution will also contain ethoxide ions (C2H5O–) in addition to OH– ions. They being a stronger base than OH– ions, will abstract a H+ ion from the β-carbon atom giving alkene as the product as a result of dehydrohalogenation.

(iii) If compound (a) is isobutyl bromide, than the compound (b) which it gives on treatment with alcoholic KOH must be 2-methyl-1-propane.

(iv) The compound (b) on treatment with HBr gives compound (c) in accordance with Markownikoff rule. Therefore, compound (c) is tert-butyl bromide which is an isomer of compound (a) ,i.e., isobutyl ‘ bromide.