NCERT Solutions for Class 12 Chemistry Chapter 16 Chemistry in Everyday Life is designed and prepared by the best teachers across India. All the important topics are covered in the exercises and each answer comes with a detailed explanation to help students understand concepts better. These NCERT solutions play a crucial role in your preparation for all exams conducted by the CBSE, including the JEE.

16.1. Sleeping pills are recommended by doctors to the patients suffering from sleeplessness but it is not advisable to take its doses without consultation with the doctor. Why?
Ans: Most of drugs taken in doses higher than recommended may produce harmful effects and act as poison and cause even death. Therefore, a doctor must always be consulted before taking the drug.

16.2. “Ranitidine is an antacid” With reference to which classification, has this statement been given?
Ans: Ranitidine is labelled as antacid since it is quite effective in neutralising the excess of acidity in the stomach. It is sold in the market under the trade name Zintac. 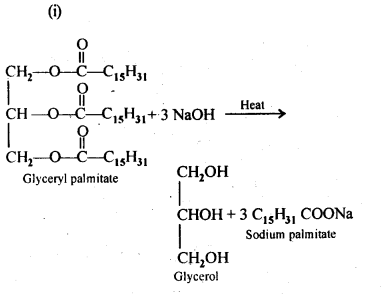 16.2. Explain the following as used in medicinal chemistry
(a) Lead compounds
(b) Target molecules or drug targets.
Ans:
(a) Lead compounds are the compounds which are effective in different drugs. They have specific chemical formulas and may be extracted either from natural sources (plants and animals) or may be synthesised in the laboratory.

(b) Target molecules or drug targets. An enzyme (E) functions by combining with the reactant (called substrate) denoted as ‘S’ to form an activated complex known as enzyme-substrate complex (E-S). The complex dissociates to form product and releases the enzyme for carrying out further activity.

16.5. Define the term chemotherapy.
Ans: It is the branch of chemistry that deals with the treatment of diseases by using chemicals as medicines.

16.11. Why are cimetidine and ranitidine better antacids than sodium hydrogencarbonate or magnesium or aluminium hydroxide?
Ans: If excess of NaHCO3 or Mg(OH)2 or Al(OH)3 is used, it makes the stomach alkaline and thus triggers the release of even more HCl which may cause ulcer in the stomach. In contrast, cimetidine and ranitidine prevent the interaction of histamine with the receptor cells in the stomach wall and thus release of HCl will be less as histamine stimulates the secretion of acid.

16.13. What are the main constituents of dettol?
Ans: Chloroxylenol .and α-terpineol in a suitable solvent.

16.15. What are food preservatives?
Ans: Preservation has a major role in the food products. Chemically preserved squashes and crushes can be kept for a fairly long time even after opening the seal of bottle.
A preservative may be defined as the substance which is capable of inhibiting or arresting the process of fermentation, acidification or any other decomposition of food. Salting i.e. addition of table salt is a well known method for food preservation and was applied in ancient times for preserving raw mangoes, tamarind, meat, fish etc. Sugar syrup can also act as a preservative. Vinegar is a useful preservative for pickles. Apart from these, sulphur dioxide and benzoic acid can be employed for the preservation of food. The major source of sulphur dioxide is potassium metabisulphite (K2S2O5). It is fairly stable in neutral and alkaline medium but gets decomposed by weak acids such as carbonic, citric, tartane and malic acids. Benzoic acid is used either as such or in the form of sodium benzoate. However, sulphur dioxide has a better preservative action than sodium benzoate against bacteria and moulds. It also retards the development of yeast in juice but fails to arrest their multiplication once the number has reached a high value. Sorne salts of sorbic acid and propionic acid are also being used these days for the preservation of the food.
The use of preservatives must be properly controlled as their indiscriminate use is likely to be harmful. The preservative should not be injurious to health and should be also non-irritant.

16.17. What are artificial sweetening agents? Give two examples.
Ans: Artificial sweeteners are chemical substances which are sweet in taste but do not add any calories to our body. They are excreted as such through urine. For example, saccharin, aspartame, alitame etc.

16.20. How are synthetic detergents better than soaps?
Ans: They can be used in hard water as well as in acidic solution. The reason being that sulphonic acids and their calcium and magnesium salts are soluble in water thus they do not form curdy white precipitate with hard water but the fatty acids and their calcium and magnesium salts of soaps are insoluble. Detergents also works in slightly acidic solution due to formation of soluble alkyl hydrogen sulphates. Soaps react with acidic solution to form insoluble fatty acids.

16.23. Why do soaps not work in hard water? (C.B.S.E. Outside Delhi 2009, 2011)
Ans: Soaps are water soluble sodium or potassium salts of higher fatty acids like palmitic acid (C15H31COOH), oleic acid (C17H33COOH) and stearic acid (C17H35COOH). Hard water contains certain calcium and magnesium salts which combine with soaps to form corresponding magnesium compounds. These being insoluble, get separated as curdy white precipitates resulting in wastage of soap.

16.25. Explain the cleansing action of soaps.
Ans: Cleansing action of soaps : Soaps contain two parts, a large hydrocarbon which is a hydrophobic (water repelling) and a negative charged head, which is hydrophillic (water attracting). In solution water molecules being polar in nature, surround the ions & not the organic part of the molecule. When a soap is dissolved in water the molecules gather together as clusters, called micelles. The tails stick inwards & the head outwards. The hydrocarbon tail attaches itself to oily dirt. When water is agitated, the oily dirt tends to lift off from the dirty surface & dissociates into fragments. The solution now contains small globules of oil surrounded detergent molecules. The negatively charged heads present in water prevent the small globules from coming together and form aggregates. Thus the oily dirt is removed from the object.