Question 1.
Name three problems that the newly independent nation of India faced. The Problem of the rehabilitation of given below
Answer:
(i)The three problems that the newly 8 million refugees who had come into the country from newly bom Pakistan.
(ii) The problem of the princely states. There were almost 500 princely states, each ruled by a Maharaja or a Nawab, and each of them had to be persuaded to join the new nation,
(iii) The new nation had to adopt a political system that would best serve the hopes and aspirations of the people.

Question 3.
Fill in the blanks.
(a) Subjects that were placed on the Union List were ………….. , ………… and …………..
(b) Subjects on the Concurrent List were …………… and ………….
(c) Economic planning by which both the state and the private sector played a role in development was called a …………. model.
(d) The death of …………. sparked off such violent protests that the government was forced to give into the demand for linguistic state of Andhra.
Answer:
(a) Taxes, defence, foreign affairs
(b) Forests, agriculture
(c) ‘mixed economy’
(d) Potti Sriramulu

Question 4.
State whether true or false:
(a) At independence, the majority of Indians lived in villages.
(fa) The Constituent Assembly was made up of members of the Congress Party.
(c) In the first national election, only men were allowed to vote.
(d) The Second Five Year Plan focused on the development of heavy industry.
Answer.
(a) True
(fa) False
(c) False
(d) True

Question 5.
What did Dr. Ambedkar mean when he said that In politics we will have equality, and in social and economic life we will have inequality”?
Answer.
What Ambedkar wanted to say was that providing voting right to the lower caste people would not remove other inequalities such as between rich and poor, or between upper castes and lower castes. These classes of people could be labelled equal only politically but in reality it could not be possible due to our social and economic structure.

Question 6.
After Independence, why was there a reluctance to divide the country on Uguistic times?
Answer.
India got independence at the cost of its division. This division had been done on the basis of religion. As a result of this division more than a million people had been killed in riots between Hindus and Muslims. In such circumstances, it was not wise to further divide the country on the basis of language. Therefore, both Prime Minister Nehru and Deputy Prime Minister Patel were against the creation of linguistic states.

Question 8.
How was the economic development of India visualised in the early decades after Independence?
Answer.
In 1950, the government set up a Planning Commission to help design and execute suitable policies for economic development. There was a broad agreement on “mixed economy’ model. Here, both the state and the private sector would play important and complementary roles in increasing production and generating jobs. Now, it was on the Planning Commission to define which industries should be initiated by the state and which by the market and how to achieve a balance between the different regions and states.
In 1956, the Second Five Year Plan was formulated which focused on the development of heavy industries such as steel, and on the building of large dams. These sectors would be under the control of the state. This focus on heavy industry, and the effort at state regulation of the economy was to guide economic policy for the next few decades.

Question 9.
Who was Mira Behn? Find out more about her life and her ideas.
Answer.
Mira Behn (1892-1982) was the daughter of a British Admiral. Her real name was Madeline Shade. She left England to live and work with Mahatma Gandhi. She devoted her life to human development, the advancement of Gandhiji’s principles and to the freedom struggle. She was awarded the Padma Vibhushan in 1982’

Question 1.
Choose the correct option.
(i) Which one is not a feature of the Indian Constitution?
(a) It adopted universal adult franchise
(b) It gave politicians special powers
(c) It provided equality before law to all citizens
(d) It offered special privileges for the poorest and most disadvantaged Indians

(ii) Which one is the subject of the State List?
(a) Education
(b) Defence
(c) Forests
(d) Agriculture

(iii) Who is called the father of the Indian Constitution?
(a) Mahatma Gandhi
(b) Jawaharlal Nehru
(c) Vallabhbhai Patel
(d) Bhimrao Ambedkar

Question 3.
State whether each of the following statements is True or False.
(i) The adivasis or the Scheduled Tribes were not granted reservation in seats and jobs.
(ii) Dr. B.R. Ambedkar belonged to a Marathi-speaking dalit family.
(iii) Bridges and dams became the symbol of development in free India.
(iv) Dharavi in Gujarat is one of the world’s largest slums.
(v) Nehru and Patel wanted to divide the country on the basis of language.
Answer.
(i) False,
(ii) True,
(iii) True,
(iv) False,
(v) False. 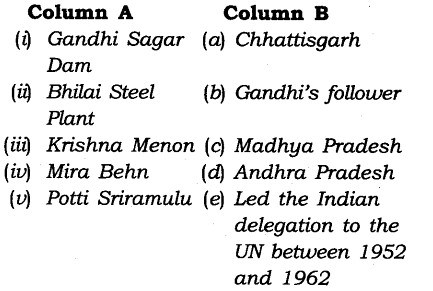 Question 2.
Which step has been described as revolutionary?
Answer.
All Indians above the age of 21 would be allowed to vote in state and national elections.

Question 6.
Who was Potti Sriramulu?
Answer.
He was a veteran Gandhian who went on a hunger strike demanding the formation of Andhra state to protect the interests of Telugu speakers.

Question 8.
What were the points of focus of the Second Five Year Plan?
Answer.
Development of heavy industries.
Building of large dams.

Question 2.
What was the label of development of India at the time it got inde¬pendence?
Answer.
At the time India got independence the label of its development was veiy low. A vast majority of Indians lived in the villages. Farmers and peasants depended on the monsoon for their survival. So did the non-farm sector of the rural economy, for if the crops failed, barbers, carpenters, weavers and other service groups would not get paid for their services either.
In the cities too the condition was not good. Factory workers usually lived in crowded slums. They had little access to education and health care.

Question 3.
What special privileges were offered for the poorest and most disadvantaqed Indians by the constitution?
Answer.
First of all the practice of untouchability was abolished. Hindu temples were thrown open to all including the former untouchables.

Question 4.
How have powers and functions of the Central and State Governments been divided by the Constitution?
Answer.
The Indian Constitution gives the division of power in the form of three lists, known as Union List, State List and Concurrent List. The Union List includes subjects such as taxes, defence and foreign affairs. On these subjects the central government makes the laws. The State List includes subjects such as education and health. It is the exclusive responsibility of the state government to take care of these subjects. In the last comes the Concurrent List which contains subjects such as forests and agriculture. On these subjects the Centre and the States have joint responsibility.

Question 5.
Under what circumstances a compromise was made with respect to language?
Answer.
Several members of the Constituent Assembly believed that the English language should be driven out of India with the British rule. They were of the opinion that Hindi should take place of English language. However, those who did not speak Hindi were of different opinion. T.T. Krishnamachari on behalf of the people of the south strongly opposed Hindi. Some threatened to separate from India if Hindi was imposed on them. Finally, a compromise was made. It was decided that while Hindi would be the ‘official language’ of India, English would be used in the courts, the services, and communications between one state and another.

Question 6.
Under what circumstances did the new state of Andhra Pradesh come into being?
Answer.
The decision of the Congress leaders not to divide the country on linguistic lines disappointed the Kannada speakers, Malayalam speakers and the Marathi speakers. They had all looked forward to having their own state. The Telrtgu-speaking districts of what was the Madras Presidency raised the strongest protests. In October 1952, a veteran Gandhian named Potti Sriramulu went on a hunger fast demanding the formation of Andhra state to protect the interests of Telugu-speakers. The fast went on and with it hartals and bandhs began to be observed. Meanwhile, Potti Sriramulu died. This incidence intensified the situation. The protests now became widespread and intense. This forced the Central Government to give in to demand. On 1 October, 1953, the new state of Andhra Pradesh came into being.

Question 1.
Give a detailed descriptions of the features of the Indian Constitution.
Answer.
We have a writtten Constitution which was adopted on 26 January 1950.
Features:
(a) One feature of the Indian Costitution was that it adopted universal adult franchise. All Indians above the age of 21 (now 18) would be allowed to vote in state and national elections.

(b) Our Constitution guaranteed equality before the law to all citizens, regardless of their caste or religious affiliation.

(c) The Constitution offered special privileges for the poorest and most disadvantaged Indians. The evil practice of untouchability was abolished. Hindu temples were thrown open to all, including the former untouchables. After a long debate, the Constituent Assembly also recommended that a certain percentage of seats in legislatures as well as jobs in government be reserved for members of the lowest castes, including the adivasis.

Question 2.
Write in brief the process of state formation.
Answer.
The Congress leaders were in no mood to further divide the country on linguistic lines. This created great
disappointment among the Kannada speakers, Malayalam speakers, and the Marathi speakers, and the Telugu speakers, because they had all looked forward to having their own state. The Telugu speakers, however, showed the strongest protests. Their leader Potti Sriramulu went on a hunger fast demanding the formation of Andhra state to protect the interests of Telugu speakers. As the fast went on, it attracted much Hartals and bandhs began to be observed. Meanwhile, Potti Sriramulu died. This incidence intensified the situation. The protests took intense form. This forced the Central Government to give in to the demand and the new state of Andhra Pradesh came into existence on 1 October, 1953.

After the formation of Andhra Pradesh, other linguistic communities also demanded their own separate states. Hence, a State Reorganisation Commission was set up, which submitted its report in 1956. It recommended the redrawing of district and provincial boundaries to form compact provinces of Assamese, Bengali, Oriya, Tamil, Malayalam, Kannada and Telugu speakers respectively. The large Hindi-speaking region of north India was broken up into several states. Then in 1960, the bilingual state of Bombay was divided into separate states for Marathi and Gujarati speakers. In the year 1960, the state of Punjab was also divided into Punjab and Haiyana, Punjab for the Punjabi speakers and Haryana for the rest who spoke Haryanvi or Hindi.

Question 1.
Read the following extract (Source 1) taken from NCERT textbook and answer the questions that follow:

Questions:
(i) What problem does Nehru talk about in this letter?
(ii) How does he propose to sort it out?
Answers:
(i) Nehru talks about the problem of Muslim minority living in India after the partition,
(ii) He proposes to sort out this problem by providing security and the rights of citizens to the Muslim minority.

Question 1.
Observe the picture taken from NCERT textbook and answer the questions that follow: 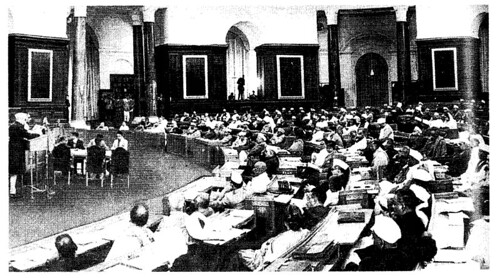