Topics and Sub Topics in Class 8 Science Chapter 7 Conservation of Plants and Animals:

Question 1.
Fill in the blanks.
(a) A place where animals are protected in their natural habitat is called ______
(b) Species found only in a particular area is known as ______
(c) Migratory birds fly to faraway places because of ________ changes.
Answer:
(a) Wildlife sanctuary
(b) endemic species
(c) climatic

Question 2.
Differentiate between the following.
(a) Wildlife sanctuary and biosphere reserve

(b) Zoo and wildlife sanctuary

(c) Villages (Rural areas): The decline in rainfall, the decrease in soil fertility, and the chances of natural disaster affect the village life.

(d) Cities (Urban areas): Deforestation result in global warming. It also results in the increase in the level of pollution. Hence, deforestation affects the life in cities.

(e) Earth: Deforestation decreases the fertility of soil. It changes the physical properties of soil. All these changes result in desertification.

Question 4.
What will happen if

Question 6.
In order to meet the ever-increasing demand in factories and for shelter, trees are being continually cut. Is it justified to cut trees for such projects? Discuss and prepare a brief report.
Answer:
It’s not justified to cut trees just to fulfill our needs. Trees are known as ‘the lung of the earth’. They are the habitat of many living organisms, including animals. They give us oxygen, and maintain the O2-CO2 balance as well. They firmly bind the soil and hence prevent soil erosion. They also reduce the chances of natural disasters like floods and droughts. They help conserve our rich biodiversity. The cutting of trees causes an increase in the carbon dioxide (CO2) level, which results in global warming. Moreover, it causes soil erosion, floods, the greenhouse effect, etc. Hence, trees must be protected.

Question 8.
Explain how deforestation leads to reduced rainfall.
Answer:
Trees give out a huge amount of water in the form of water vapour during transpiration. The reduction of water vapour affects cloud formation and thus, results in less rainfall.

Question 9.
Find out about national parks in your state. Identify and show their location on the outline map of India.
Answer:
Consider the map given below: 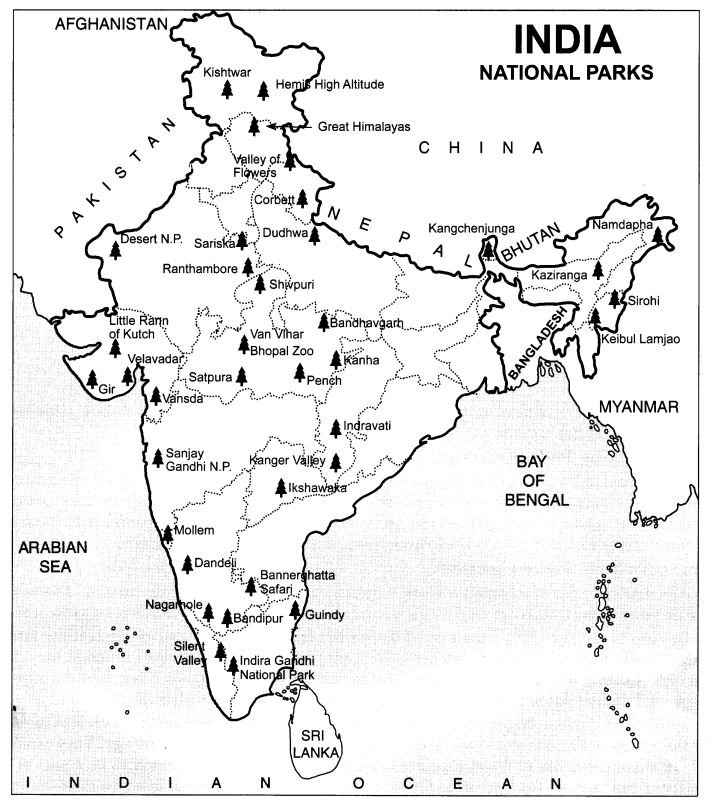 Question 10.
Why should paper be saved? Prepare a list of ways by which you can save paper.
Answer:
A large number of trees can be saved by saving paper. This will also save water that is used to manufacture paper. Moreover, the harmful chemicals used in papermaking will show their least effects on human beings and other organisms.
Some ways to save paper are the following:

Question 11.
Complete the word puzzle.
Down
1. Species on the verge of extinction.
2. A book carrying information about endangered species.
5. Consequence of deforestation.
Across
1. Species which have vanished.
3. Species found only in a particular habitat.
4. Variety of plants, animals and microorganisms found in an area.
Solution: 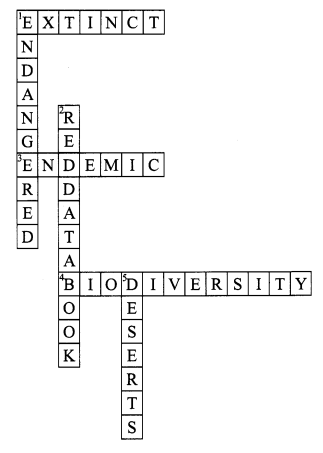 Activity 3 (NCERT Textbook, Page 79)
Find out the number of national parks, wildlife sanctuaries and biosphere reserves in your district, state and country. Record in Table 7.1. Show these areas in an outline map of your state and India.
Protected Areas for Conservation

Solution:
Do it yourself.

Activity 4 (NCERT Textbook, Page 80)
List the factors disturbing the biodiversity of your area. Some of these factors and human activities may disturb the biodiversity unknowingly. List these human activities. How can these be checked? Discuss in your class and write a brief report in your notebook.
Solution:
Cutting of trees, rising air, water and land pollution, excessive construction, using more resources or their products affect the biodiversity harshly.

Question 1.
What is meant by deforestation ?
Answer:
Deforestation means clearing of forests,and using that land for other purpose like building houses and factories.

Question 2.
What is meant by biosphere ?
Answer:
Biosphere is that part of the earth in which living organisms exist or which supports life.

Question 6.
Define species.
Answer:
Species is a group of individuals which are capable of interbreeding with each other.

Question 9.
What are National Parks ?
Answer:
National parks are reserves that protect the flora and fauna of the place.

Question 11.
What is meant by ecosystem ?
Answer:
An ecosystem comprises of all the plants, animals and microorganisms in an area along with non-living components such as climate, soil, river, etc.

Question 12.
What is Red Data Book ?
Answer:
Red Data Book is the source book which keeps a record on population status of the species included in the Red List.

Question 16.
Kaziranga and Corbett are …………. of India.
Answer:
National parks.

Question 18.
Why should soil be conserved ?
Answer:
Soil should be conserved to maintain the fertility of the soil.

Question 19.
Name two animal species which have become extinct in the past years.
Answer:
Dodo and thylacine.

Question 20.
Give one word for species found only in a particular area.
Answer:
Endemic species.

Question 21.
Name the organisation that produces the Red List.
Answer:
IUCN (International Union for Conservation of Nature and Natural Resources).

Question 2.
Differentiate between the following : [NCERT]

Question 6.
Give two reasons why sanctuaries should be maintained.
Answer:

Question 7.
What are Rock shelters ? Where are they found ?
Answer:
Rock shelters are found inside the Satpura National Park. These are the prehistoric evidences of human life in these jungles, which give us an idea about the life of primitive humans.

Question 8.
What is Project Tiger ? What is its objective ?
Answer:
Project Tiger was launched on 1st April 1973 by our government to protect the tigers of the country.

Question 9.
Why should paper be saved ?
Answer:
We should save paper because it takes 17 full grown trees to make one tonne of paper.

Question 10.
How can we save paper ?
Answer:
We should reuse used paper and recycle it.

Question 12.
Which factors are responsible for cutting of forest ?
Answer:
As man’s need for land used in housing and farming and wood for fuel and construction increased, he started cutting down forests.

Question 14.
How can overgrazing destroy forests ?
Answer:
Due to overgrazing, the young trees get eaten or killed by trampling. The lower leaves are eaten up and the roots and trunks are injured by cattle.

Question 15.
How does vegetation help to conserve water ?
Answer:
Vegetation slows down the flow of rain water on land and increases the absorption of water by the soil.

Question 16.
Give the difference between Red List and Red Data Book.
Answer:
The Red List is a compilation of endangered wildlife species. The Red Data Book provides data on population status of the species included in the Red List.

Question 3.
“When we conserve forests, we conserve wildlife and soil also”. Discuss. [DAV2002]
Answer:
Wildlife conservation is related to forest conservation. Man has cleared forests, converted grasslands into farmlands and flooded large areas by constructing dams. This has destroyed the habitat of the wildlife. Forests prevent soil erosion and maintain the fertility of the soil.

Question 6.
Fill in the blanks : [NCERT]

Question 7.
What will happen if: [NCERT]

Question 8.
“Water is renewable but oil is not”. Explain.
Answer:
Water evaporates from forest and other vegetation and condenses in the upper layers of the atmosphere to form clouds and then it rains. The water goes down in the soil and is therefore, a renewable source.
Oil is found below the earth in crude form. It is formed after millions of years. When the oil is used, it is lost. Therefore, it is not a renewable source.

Question 1.
Discuss the effects of deforestation on the following : [NCERT]

Question 4.
“Conservation of resources means not only using the resources judiciously but also maintaining their quality”. Discuss.
Answer:
This statement is correct because if we have the resources of poor quality, it is of no use. We may have enough water, but if it is polluted it causes more harm than benefit. It causes many diseases in human beings and animals. Polluted air causes more harm in many cities as people get many diseases.

Question 5.
Why is managing of resources not very simple ?
Answer:
Managing resources is not very simple because the problems are inter related. Solving one problem leads to another problem. Banning of insecticides will save wildlife but will lead to shortage of food due to destruction of crops by insects. So, we can say that banning of one thing leads to shortage of another thing.

Question 1.
Conversion of fertile land into deserts is known as
(a) deforestation
(b) desertification
(c) conservation
(d) none of these.
Answer:
(b)

Question 2.
The variety of life on the earth is commonly referred to as
(a) biodiversity
(b) biosphere
(c) afforestation
(d) none of these.
Answer:
(a)

Question 5.
When no member of a species exists, it is known as
(a) endemic species
(b) endangered species
(c) extinct
(d) vulnerable species.
Answer:
(c)

Question 7.
A species found only in one particular place is known as
(a) endemic
(b) vulnerable
(c) endangered
(d) extinct.
Answer:
(a)

Question 8.
Migration of birds takes place because
(a) they like to travel
(b) to find abundant food
(c) to meet other birds
(d) none of these.
Answer:
(b)

Question 9.
Growing new trees in forests is known as
(a) deforestation
(b) desertification
(c) afforestation
(d) none of these.
Answer:
(c)

UP Government schools for Classes 1 to 8 to reopen from July 1, students no allowed

NEET 2021: Registration, exam date, application form, how to apply and other FAQs answered