Question 4.
Look up the annual calendar of holidays of your school. How many of them pertain to different’religions? What does this indicate?
Answer:
Holidays in a school calendar for different religions:

Question 5.
Find out some examples of different views within the same religion.
Answer:
Different views are followed even within the same religion. As for example, only in the Hindu religion, we have hundreds of deities worshipped by different groups of people. Similarly, in Muslim community, there are Shiyas and Shunnis. In Jainas, there are Shwetambar and Digambar sects. In Buddha Dharma, there are Hinayaans and Mahayaans.

Question 6.
The Indian State both keeps away from religion as well as intervenes in religion. This idea can be quite confusing. Discuss this once again in class using examples from the chapter as well as those that you might have come up with.
Answer:
India is a land of complex ideas. It is difficult to understand what it really wants. There are many ideals in the Constitution but practices are quite different from them. In many cases we see laws explain a concept in a different way. But people interpret it differently. Law itself in some cases act differently. As for example, in a secular state law has nothing to say in any of the religions practices but when the dominance of upper castes in religion was brought to question the law took favour of the lower castes. This interference of the State creates confusion.

Question 7.
This poster alongside highlights the need for ‘Peace’. It says, “Peace is aneverending process….. It cannot ignoreour differences or overlook our common interests.” Write in your own words what you think the above sentences are trying to convey? How does it relate to the need for religious tolerance? 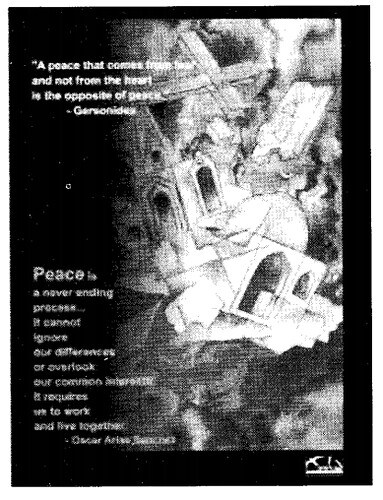 Choose the correct option:
(i) Which one is a correct statement with regard to Saudi Arabia?
(a) Non-Muslims can gather in a public place for prayer.
(b) They cannot build a temple, church, etc.
(c) They can live in their own way.
(d) None of the above

(iii) The government cannot force Sikhsto wear a helmet while driving two wheelers because ………..
(a) Sikhs are very powerful
(b) they do not obey government rules
(c) they look handsome in pagri
d) wearing a pagri is a very important part of Sikh religion
(iv) In American secularism, there is a …………
(a) strict separation between religion and the State
(b) loose separation between religion and the State
(c) strict mingling of religion with the State
(d) strict rule that contracts all religions
Answer:
(i) (b), (ii) (a), (iii) (d), (iv) (a).

II. Fill In The Blanks

Fill in the blanks with appropriate words to complete each sentence.
(i) The intervention of the State can also be in the form of ………….
(ii) In the United States of America, most children in government schools have to begin their school day reciting the ‘Pledge of ……………….
(iii) The most important aspect of secularism is its separation of religion from …………. power.
(iv) Government schools don’t celebrate any ………….. festivals in the school premises.
(v) The Indian State is not ruled by a ……………….. group and nor does it …………… any one religion.
Answer:
(i) support   (ii) Allegiance   (iii) state  (iv) religious   (v) religious, support

State whether each of the followingstatements is True or False.
(i) In Indian secularism the State is not strictly separate from religion.
(ii) Wearing a pagri is central to a Sikh’s religious practice.
(iii) Government schools can promote any one religion.
(iv) The Indian Constitution does not grant religious communities to set up their own schools and colleges.
(v) In Indian secularism, the State cannot intervene in religion.
Answer:
(i) True,
(ii) True,
(iii) False,
(iv) False,
(v) False. 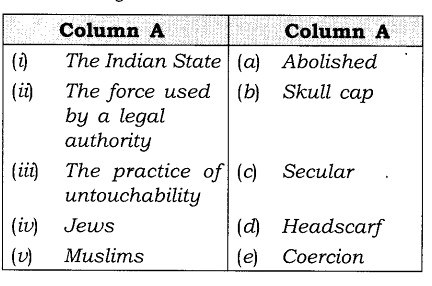 Question 3.
How are non-Muslims treated in Saudi Arabia?
Answer:
In Saudi Arabia, non-Muslims are not allowed to build a temple, church etc. They also cannot gather in a public place for prayers.

Question 7.
Why is Paramjit allowed to drive in pagri?
Answer:
Paramjit is a Sikh youth and for him wearing a pagri is a very important part of his religion.

Question 9.
What is meant by ‘principled distance’?
Answer:
This means that any interference in religion by the State has to be based on the ideals laid out in the Constitution.

Question 3.
Explain with an example that in Indian secularism the State can intervene in religious affairs.
Answer:
An important aspect of India secularism is that the State can intervene in religious affairs. We can prove this fact with an example of untouchability. It was a practice in which the members of the same religion, i.e. upper caste Hindus, dominated other members, i.e. lower caste people, within it. In order to prevent this religion-based exclusion and discrimination of lower castes, the Indian Constitution banned untouchability. In this instance, the State intervened in religion in order to end a social practice that it believed discriminated and excluded and that violated the Fundamental Rights of Lower castes.

Question 4.
What is secularism?
Answer:
The Indian Constitution contains Fundamental Rights. These rights are very important because they protect us against State power as well as against the tyranny of the majority. The Indian Constitution allows individuals the freedom to live by their religious beliefs and practices as they interpret these. Thus, our Constitution gives religious freedom to all and to maintain it India adopted a strategy of separating the power of religion and the power of the State. Secularism is, in fact, the separation of religion from the State.

Question 1.
In what different ways does the Indian State work to prevent religious domination?
Answer:
Indian secularism works in various ways to prevent religious domination:
(a) It uses a strategy of distancing itself from religion. The Indian State is not ruled by a religious group. It also does not support any one religion. In our country, government places like law courts,police stations, government schools and offices are not supposed to demonstrate or promote any one religion.

(b) The second way in which Indian secularism works to prevent the domination of religion is through a strategy of non-interference. This means that in order to respect the sentiments of all religions and not interfere with religious practices, the State makes certain exceptions for particular religious communities. Just take the example of the Sikh community. For Sikhs, wearing a pagriis a very important part of their religion. The government cannot force them to wear a helmet while driving a two-wheeler.

(c) The third way in which Indian secularism works to prevent the domination of religion is through a strategy of intervention. Untouchability presents a good example where members of the same religion, e.upper caste Hindus, dominate other members, lower castes within it. In order to prevent this religion-based discrimination of lower castes, our Constitution banned untouchability. Here, the State intervened in religion in order to uproot a social practice that it believed discriminated and excluded, and that violated the Fundamental Rights of the people belonging to lower caste.