Question 1.
Answer the following questions.
(i) Which are the two main climatic factors responsible for soil formation?
(ii) Write any two reasons for land degradation today.
(iii) Why is land considered an important resource?
(iv) Name any two steps that government has taken to conserve plants and animals.
(v) Suggest three ways to conserve water.
Answer.
(i) Temperature and rainfall are two main climatic factors responsible for soil formation. Rainfall contributes in breaking the rocks by applying pressure. Temperature fluctuations between hot and cold also form cracks in the rocks.

(ii) Reasons for land degradation are:

(iii) Land is an important resource because it provides surface for agriculture, living, forestry, industries, construction, etc. Most activities take place on land.

(iv) Steps taken by the government include establishment of natural parks and wildlife sanctuaries in different parts of India. Their purpose is conservation of vegetation and wildlife, respectively.

(v) Three ways to conserve water are as under:

Question 2.
Tick the correct answer.
(i) Which one of the following is NOT a factor of soil formation?
(a) time
(b) soil texture
(c) organic matter

(ii) Which one of the following methods is most appropriate to check soil erosion on steep slopes?
(a) shelter belts
(b) mulching
(c) terrace cultivation

(iii) Which one of the following is NOT in favour of the conservation of nature?
(a) switch off the bulb when not in use
(b) close the tap immediately after using
(c) dispose polypacks after shopping
Answer.
(i) (b), (ii) (c), (iii) (c).

Question 4.
State whether the given statement is true or false. If true, write the reasons.
(i) Ganga-Brahmaputra plain of India is an overpopulated region.
(ii) Water availability per person in India is declining.
(iii) Rows of trees planted in the coastal areas to check the wind movement is called intercropping.
(iv) Human interference and changes of climate can maintain the ecosystem.
Answer.
(i) True,
(ii) True,
(iii) False,
(iv) False,

Question 1.
Multiple Choice Questions Choose the correct option.
(i) Which of these resources covers about three-fourths of the total surface of earth?
(a) land
(b) soil
(c) air
(d) water

(ii) What are low-lying areas very susceptible to?
(a) earthquakes
(b) landslides
(c) flooding
(d) tsunamis

(iii) Which of these physical features are best suited for living?
(a) plains and river valleys
(b) mountains
(c) deserts
(d) lakes and rivers

(iv) Which of these is example of community land?
(a) the Sunderban forests
(b) a bungalow
(c) the Parliament House
(d) none of these

(v) What is the majority of land in India used for?
(a) cultivation
(b) pasture
(c) forests
(d) none of these

(vi) Which of these countries is mainly covered with forest land?
(a) India
(b) Brazil
(c) USA
(d) both b and c

Question 3.
State whether each of the following statements is true (T) or false (F).
(i) Land has similar features all over the surface of the earth.
(ii) Plains and valleys are densely populated because of soil fertility.
(iii) Population and technology are important factors that determine land use pattern.
(iv) The growing population is not a cause of soil erosion.
(v) Topography and organic material affect soil composition of soil.
(vi) Time affects the rate of humus formation during the process of soil formation.
(vii) The earth is called the water planet because of the large amount of water available over it.
(viii) Africa and West Asia are areas facing serious water scarcity.
(ix) Forest and other vegetation promote surface run-off.
(x) The convention, CITES, lists species which should not be traded.
Answer.
(i) False
(ii) True
(iii),True,
(iv) False,
(v) True,
(vi) True,
(vii) True,
(viii) True,
(ix) False,
(x) True. 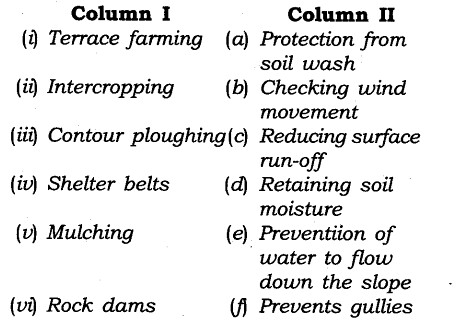 Question 2.
Give three common forms of land use.
Answer.
Three common land use forms are: (i) As cropland, (ii) Pasture, (iii) Forests.

Question 4.
Define soil.
Answer.
The thin layer of grainy substance covering the surface of the earth is called soil.

Question 6.
What is parent rock?
Answer.
The rock from which soil is derived is called parent rock.

Question 9.
Why is the earth called the “water planet”?
Answer.
The earth’s surface has about three- fourths water, so it is called “water planet”.

Question 10.
In what forms is fresh water found on the earth?
Answer.
Fresh water is found in the forms of groundwater, water in rivers and lakes and as water vapour.

Question 14.
How is a bird like vulture important for the ecosystem?
Answer.
A vulture feeds on dead livestock and so it cleanses the environment.

Question 16.
What is the Vanamahotsava?
Answer.
The social programme of planting trees, organised at community level is called vanamahotsava.

Question 1.
How is land being degraded? Suggest methods to conserve land resource.
Answer.
The ever-growing population has increased demand for living space, due to which forests are being destroyed, thus causing land degradation. The rate of degradation of land resources can be checked by promoting afforestation, land reclamation, regulated use of chemical pesticide and fertilisers and checking overgrazing.

Question 2.
What is weathering?
Answer.
Weathering refers to the breaking up and decay of exposed rocks. This breaking up and decay is caused by temperature fluctuations between too high and too low, frost action, plants, animals and even human activity. Weathering is the major process involved in the formation of soil. It takes millions of years to form soil by this process.

Question 3.
How is water an important resource?
Answer.
Water is an indispensable resource of life. Firstly water serves the most basic purpose of drinking, without which life is impossible. It is helpful in cleaning our bodies, clothes and utensils. Farmers depend on water for irrigation. Water is also used in cooking food. Water is a source of electricity as well. Plants require water for their growth. Water is required for various industrial purposes in factories.

Question 4.
Write a short note on wildlife.
Answer.
The animal kingdom, which consists
of animals, birds, aquatic creatures and insects, is called wildlife. These creatures provide us various important products such as milk, meat, hides and wool. Bees give us honey and help in pollination. They play the role of decomposers in the environment. Birds like the vulture are scavengers and they help in cleansing the environment. All forms of wildlife are an integral part of our ecosystem.

Question 5.
What are the major types of vegetation in the world? Describe vegetation in different rainfall conditions.
Answer.
The major types of vegetation in the world are grouped as forests, grasslands, scrubs and tundra.” In areas of heavy rain, huge trees can be found. Forests are abundant in areas of heavy rainfall. With moisture and rainfall the density of forests declines. In moderate rainfall areas, grasslands are found. In diy areas we find thorny shrubs and scrubs. Plants here have deep roots and leaves have thorny surface to reduce loss of moisture. The tundra vegetation consists of mosses and lichens.

Question 1.
Describe methods of soil conservation.
Answer.
Some common methods of soil conservation are mentioned below: Mulching. Mulching is the process of covering the bare ground between plants with a layer of organic matter like straw. It contributes in retaining soil moisture.
Terrace Farming. Terrace farming is the method of farming in which broad flat steps or terraces are made on the steep slopes so that flat surfaces are available to grow crops 4 They reduce run-off and soil erosion. Intercropping. In intercropping, different crops are grown in alternate rows and are sown at different times to protect the soil from being washed away by rain.
Contour Ploughing. Ploughing parallel to the contours of a hill slope to form a natural barrier for water to flow down a slope is called contour ploughing.

Shelter Belts. Rows of trees that are planted in certain areas to check wind movement are called shelter belts. Contour Barriers. Stones, grass and soil are used to build barriers along contours. Trenches are made in front of the barriers to collect water.
Rock Dams. This prevents gullies and further soil loss since rocks are piled up to slow down the flow of water. Q.2. What is the threat to vegetation and wildlife? What is the need to conserve them? How can we do this? [V. Imp.] Ans. Forests and wildlife are an important resource. Climate change and human interferences in the animal kingdom can cause loss of natural habitat for plants and animals. Certain species have become endangered and many have become extinct now.

Poaching incidents contribute to their extinction. Plants and animals are an important part of the ecosystem. Plants provide food, oxygen and shelter to humans and animals. Animals provide us important products such as milk, meat, honey, etc. There exists a balance in the environment if we do not disturb the natural number of species living on the earth. A single extinction can affect the ecosystem badly. So animals and plants obviously need to be conserved. The government has introduced national parks, wildlife sanctuaries and biosphere reserves for this purpose. Poaching should be severely dealt with. Indiscriminate killings need to be discouraged. Social awareness must be created about importance of trees, social forestry. Students should be involved in vanamahotsavas at regional and community levels.

NEET 2021: When will exam dates be announced?