Question 1.
Answer the following questions.
(i) Name any three common minerals used by you every day.
(ii) What is an ore? Where are the ores of metallic minerals generally located?
(iii) Name two regions rich in natural gas resources.
(iv) Which sources of energy would you suggest for
(a) rural areas (b) coastal areas (c) arid regions
(v) Give five ways in which you can save energy at home.
Answer:
(i) Three common minerals used by us in day-to-day life are copper, iron and salt.
(ii) An ore is a rock from which minerals are mined. Ores of metallic minerals are found usually in igneous and metamorphic rock formations.
(iii) Two regions in India rich in natural gas resources are: Jaisalmer and Krishna-Godavari delta.

(v) Five ways in which one can save energy at home:

Question 2.
Tick the correct Answer:
(i) Which one of the following is not a characteristic of minerals?
(a) They are created by natural processes.
(b) They have a definite chemical composition.
(c) They are inexhaustible.
(d) Their distribution is uneven.

(ii) Which one of the following is not a producer of mica?
(a) Jharkhand
(b) Karnataka
(c) Rajasthan
(d) Andhra Pradesh

(iii) Which one of the following is a leading producer of copper in the world?
(a) Bolivia
(b) Ghana
(c) Chile
(d) Zimbabwe

(iv) Which one of the following practices will not conserve LPG in your kitchen?
(a) Soaking the dal for some time before cooking it.
(b) Cooking food in a pressure cooker.
(c) Keeping the vegetables chopped before lighting the gas for cooking.
(d) Cooking food in an open pan kept on low flame.
Answer:
(i) (c), (ii) (b), (iii) (c), (iv) (d).

Question 3.
Give reasons.
(i) Environmental aspects must be carefully looked into before building huge dams.
(ii) Most industries are concentrated around coal mines.
(iii) Petroleum is referred to as “black gold”.
(iv) Quarrying can become a major environmental concern.
Answer:
(i) Building huge dams causes destabilisation of the natural habitats of plants and wild animals living in the area. These environmental aspects should be looked into before building dams.
(ii) Presence of coal mines around industries reduces the costs of transportation and also ensures easy availability of fuel.
(iii) Petroleum is a very valuable fossil fuel. It is used for running all machineries, transport vehicles, from a bicycle to an aeroplane.
(iv) After quarrying, pits are not covered so they may cause environmental hazards.

Question 4.
Distinguish between the followings.
(i) Conventional and non-conventional sources of energy.
(ii) Biogas and natural gas.
(iii) Ferrous and non-ferrous minerals
(iv) Metallic and non-metallic minerals.
Answer:
(i)

Question 1.
Choose the correct option.
(i) Which of these is a non-metallic mineral?
(a) Iron ore
(b) Bauxite
(c) Limestone
(d) Manganese ore

(ii) Which continent produces more than half of the world’s tin?
(a) Africa
(b) Asia
(c) Europe
(d) South America

(iii) Which continent is the leading producer of iron ore in the world?
(a) North America
(b) Asia
(c) Europe
(d) Australia

(v) What is the name given to the electricity produced from coal?
(a) Nuclear power
(b) Thermal power
(c) Fossil fuel
(d) None of these

(vi) Which of these is a conventional source?
(a) Coal
(b) Petroleum
(c) Natural gas
(d) All of these

(vii) Which of these is called buried sunshine?
(a) Petroleum
(b) Coal
(c) Solar energy
(d) Tidal energy

Question 3.
State whether each of the following statements is true (T) or false (F).
(i) All ores are rocks but all rocks are not minerals.
(ii) Quarrying is good for the environment.
(iii) Mineral fuels like coal and petroleum are found in sedimentary strata.
(iv) Coal is more predominant in Canadian Shield Region than Appalachians.
(v) Chile and Peru are leading producers of copper.
(vi) Kolar in Karnataka has large deposits of silver.
(vii) Copper is an element used in almost everything.
(viii) Bauxite is the ore of aluminium.
(ix) Nuclear power can be produced from the nuclei of most elements.
Answer:
(i) Ture
(ii) False,
(iii) Ture,
(iv) False,
(v) True,
(vi) False,
(vii) True,
(viii) True,
(ix) False. 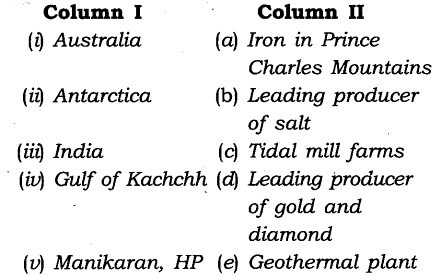 Question 1.
Differentiate between a rock and an ore.
Answer:
A rock is an aggregate of one or more minerals. An ore is a rock from which minerals are mined.

Question 2.
Define quarrying.
Answer:
Quarrying is a process of extraction in which minerals lying near the surface are simply dug out.

Question 5.
Name two minerals in whose production India contributes a significant part.
Answer:
India has vast deposits of high grade iron ore, and it is also a leading producer of salt.

Question 6.
In which industry is silicon important? From which ore is it obtained?
Answer:
Silicon is important in the computer industry. It is obtained from quartz.

Question 7.
Why are minerals considered non-renewable?
Answer:
Minerals take thousands of years to form. The rate of formation is much smaller than rate of consumption. So we classify them as non-renewable.

Question 10.
What is natural gas?
Answer:
Natural gas is a fossil fuel obtained with petroleum deposits in oil fields.

Question 14.
Give one advantage of biogas over natural gas.
Answer:
Biogas is a renewable source of energy whereas the amount of natural gas is limited.

Question 3.
Describe the mineral distribution in North America.
Answer:
The mineral deposits in North America are found in three zones: the Canadian region in the north of the Great Lakes, the Appalachian region and the Rocky Mountains in the West. Iron ore, nickel, gold, uranium and copper are mined in the Canadian Shield Region, coal in the Appalachian region. Western Cordilleras have vast deposits of copper, lead, zinc, gold and silver.

Question 4.
Write common uses of minerals.
Answer:
Minerals are important in many industries. Minerals used in gems are usually very hard. These are then set in varying styles of jewellery. Iron and copper are metals used in almost everything. Copper is present in everything from coins to pipes and electricity wires. Silicon, obtained from the mineral quartz, is the base of computer industry. Aluminium, obtained from bauxite ore, and its alloys are used in aeroplanes due to their light weight. Aluminium is also used in kitchen cookware.

Question 5.
How is hydroelectricity, produced?
Answer:
Hydroelectricity is produced from the energy possessed by water falling from great heights. River water is stored in dams. When rain water or river water falls from heights, it flows over turbine blades placed at the bottom of the dam. The moving blades are connected to a generator which produces electricity from this energy. This electricity is called hydroelectricity. The water discharged after its production is used for irrigation.

Question 1.
Name and describe some non- conventional sources of energy.
Answer:
Non-conventional power sources are those power sources that have come into use recently due to the depleting conventional resources and growing awareness. Solar energy, wind energy, geothermal energy, nuclear power and tidal energy are examples of non- conventional power sources.
Solar energy is the heat and light energy captured from the sun. Solar cells help to convert this energy to electricity. Solar energy is used in solar heaters, solar cookers, solar dryers, etc.
Wind energy is the energy possessed by moving air (wind). Windmills are used to convert wind energy to electricity. Wind farms having clusters of windmills located in coastal regions and mountain passes.
Nuclear power is energy possessed by the nuclei of atoms of naturally occurring radioactive elements like uranium-, thorium, etc.
Geothermal energy is the heat energy obtained from the inside of the earth. The temperature inside the earth increases as we go deeper. This heat is used to produce electricity. It is accessed in the form of hot springs. Tidal energy is the energy generated from tides. It is harnessed by building dams at narrow openings of the sea. Biogas is a gaseous fuel obtained from the decomposition of organic waste like dead plant and animal material or animal dung and kitchen waste. It is an excellent fuel for cooking and lighting, and is environment-friendly.

Question 2.
Write the advantages and dis¬advantages of non-conventional sources of energy.
Answer:
Advantages: