Question 1.
Fill in the blanks:
(a) The British described the tribal people as …………
(b) The method of sowing seeds in jhum cultivation is known as …………….
(c) The tribal chiefs got …………. titles in central India under the British land settlements.
(d) Tribals went to work in the of Assam and the ……………… in Bihar.
Answer:
(a) savage
(b) broadcast
(c) land
(d) tea plantations, coal mines

Question 2.
State whether true or false:
(a) Jhum cultivators plough the land and sow seeds.
(b) Cocoons were bought from the Santhals and sold by the traders at five times the purchase price.
(c) Birsa urged his followers to purify themselves, give up drinking liquor and stop believing in witchcraft and sorcery.
(d) The British wanted to preserve the tribal way of life.
Answer:
(a) False
(b) True
(c) True
(d) False

Question 3.
What problems did shifting cultivators face under British rule?
Answer:
The life of shifting cultivators was directly connected to the forest. So, when the British brought changes in forest laws, their life was badly affected. The British extended their control over all forests and declared that forests were state property. Some forests were classified as Reserved Forests for they produced timber which the British wanted. In these forests people were not allowed to move freely and practise jhum cultivations. As a result, many jhum cultivators had to move to other areas in search of work.

Question 5.
What accounts for the anger of the tribals against the dikus?
Answer:
The tribals wanted to drive out the dikus—missionaries, moneylenders, Hindu landlords, and the government because they saw them as the cause of their misery. The following facts account for their anger against the dikus:

Question 6.
What was Birsa’s vision of a golden age? Why do you think such a vision appealed to the people of the region?
Answer:
Birsa was deeply influenced by many of the ideas he came in touch within his growing-up years. The movement that he led aimed at reforming tribal society. He urged the Munda to give up drinking liquor, clean their village, and stop believing in witchcraft and sorcery. He often remembered the gloden past of the Mundas, when they lived a good life, constructed embankments, tapped natural springs, planted trees and orchards, practised cultivation to earn their living. They did not kill their brethren and relatives. They lived honestly. Birsa wanted to restore this glorious past.
Such a vision appealed to the people of the region because they were very much eager to lead a free life. They had got fed up with the colonial forest laws and the restrictions that were imposed on them.

Question 7.
Find out from your parents, friends or teachers, the names of some heroes of other tribal revolts in the twentieth century. Write their story in your otvn words.
Answer:
Students are suggested to do this work themselves.

Question 1.
Choose the correct option:
(i) The Khonds belonged to
(a) Gujarat
(b) Jharkhand
(c) Orissa
(d) Punjab

Question 2.
Fill in the blanks with appropriate words to complete each sentence.
(i) The lives of shifting cultivators depended on free movement within …………….
(ii) The …………… were not ready to work as labourers.
(iii) The British wanted tribal groups to …………. and become …………… cultivators.
(iv) The British declare that forests were …………… property.
(v) Birsa was bom in a family of ………….. a tribal group that lived in …………………
(vi) The Santhals of Hazaribagh reared
Answer:
(i) forests
(ii) Baigas
(iii)settle down, peasant
(iv) state
(v) Mundas, Chottanagpur
(vi) cocoons

Question 3.
State whether each of the following statements is True or False.
(i) The traders and moneylenders never deceived the tribal people.
(ii) The silk growers earned huge amount of wealth and therefore enjoyed a happy life.
(iii) Many tribal groups did not like the colonial forest laws and therefore revolted.
(iv) The jhum cultivators in north-east India stopped their traditional practice.
(v) The tribal Chiefs lost their authority under the British mle.
Answer:
(i) False,
(ii) False,
(iii) True,
(iv) False,
(v) True.

Question 1.
Mention different types of activities of the tribal people.
Answer:
(a) Some practised jhum cultivation,
(b) Some were hunter-gatherers.
(c) Some herded animals.
(d) Some took to settled cultivation.

Question 2.
Why did the British want tribal groups to settle down and become peasant cultivators?
Answer:
It was because settled peasants were easier to control and administer than people who were always on the move.

Question 3.
Why did the British introduce land settlements?
Answer:
They did so in order to get a regular revenue source for the state.

Question 4.
Why were some forests classified as Reserved Forests?
Answer:
These forests produced timber which the British wanted.

Question 5.
What problem did the British face after they stopped the tribal people from living inside forests?
Answer:
They faced the problem of shortage of labour.

Question 6.
Why did the Forest Department establish forest villages?
Answer:
It did so in order to ensure a regular supply of cheap labour.

Question 7.
How did the tribal groups view the market and the traders?
Answer:
They viewed them as their main enemies.

Question 8.
Who was Birsa?
Answer:
Birsa belonged to a family of Mundas, a tribal group that lived in Chottanagpur.

Question 9.
What did people say about him?
Answer:
People said that he had miraculous powers. He could cure all diseases and multiply grain.

Question 12.
On what charges was Birsa convicted?
Answer:
Birsa was convicted on the charges of rioting.

Question 1.
What were the main activities of the Khonds living in the forests of Orissa?
Answer:
The Khonds were basically hunter- gatherers. They regularly went out on collective hunts and then divided the meat amongst themselves. They ate fruits and roots collected from the forest and cooked food with the oil they extracted from the seeds of the sal and mahua. They used many forest shrubs and herbs for medicinal purposes and sold forest produce in the local markets. All their activities were based on forest.

Question 5.
Why was the British effort to settle jhum cultivators not very successful?
Answer:
(a) It is usually difficult to carry on settled plough cultivation in areas where water is scarce and the soil is dry.
(b) Jhum cultivators who took to plough cultivation often suffered since their fields did not prdfcluce good yields. Hence, the jhum cultivators in north-east India insisted on continuing with their traditional practice.
(c) The British faced widespread protests. Therefore, they allowed them to carry on shifting cultivation in some parts of the forest.

Question 6.
What problem did the British face after they brought changes in forest laws? How did they solve this problem?
Answer:
The British stopped the tribal people from living inside forests by introducing some changes in forest laws. This created a problem. They lost labour force because most of the jhum cultivators moved to other areas in search of work. Who would cut trees for railway sleepers and transport logs?
Colonial officials solved this problem by giving jhum cultivators small patches of land in the forests and allowing them to cultivate these on the condition that these who lived in villages would have to provide labour to the Forest Department and look after the forests. The Forest Department established forest villages in many regions to ensure a regular supply of cheap labour.

Question 7.
Give a brief history of the revolts by different tribal groups in the country.
Answer:
Several tribal groups in different parts of the country were unhappy with the changes they were experiencing and the problems they were facing under the British rule. Finally, they rebelled against the changes in laws, the restrictions on their practices, the new taxes they had to pay, and the exploitation by traders and moneylenders.

Question 8.
How did Birsa resume his movement after his release in 1897?
Answer:
Birsa was released in 1897. Now he began touring the villages to gather support. He used traditional symbols and language to rouse people, urging them to destroy dikus and the Europeans and establish a kingdom under his leadership. Birsa’s followers began targetting the symbols of dikus and European power. They attacked police stations and churches and raided the property of moneylenders and zamindars. They raised the white flag as a symbol of Birsa Raj.

Question 1.
How did different tribal groups live? Describe in brief.
Answer:
Tribal people were involved in many different types of activities:

Question 2.
Give a brief life sketch of Birsa Munda.
Answer:
Birsa was bom in the mid-1870s in a family of Mundas, a tribal group that lived in Chottanagpur. He grew up around the forests of Bohanda, grazing sheep, playing flute and dancing in the local akharas. As an adolescent Birsa heard tales of the Munda uprisings of the past and saw sirdars (leaders) of the community urging the people to revolt. Birsa took great interest in the sermons of missionaries because they inspired the Mundas to attain their lost rights. He also enjoyed the company of a prominent Vaishnav preacher. He wore the sacred thread and began to value the importance of purity and piety.

He decided to reform tribal society. He urged the Mundas to give up all their bad practices like drinking liquor, etc. Here, it is worth-mentioning that Birsa also turned against missionaries and Hindu landlords. He urged his followers to restore their glorious past. He talked of a golden age in the past when Mundas lived a very good life. They did not kill their brethren and relatives. Birsa wanted to see these qualities again in the tribal society.

The British officials got terrified to visualise the political aims of Birsa Munda. As the movement spread, the government arrested him in 1895, convicted him on the charges of rioting. He was also jailed him for two years.
After Birsa was released in 1897, he began to tour the villages to gather support. He urged his supporters to destroy dikus and the Europeans. In 1900, he died of cholera and the movement faded out. But it proved significant in the long run. 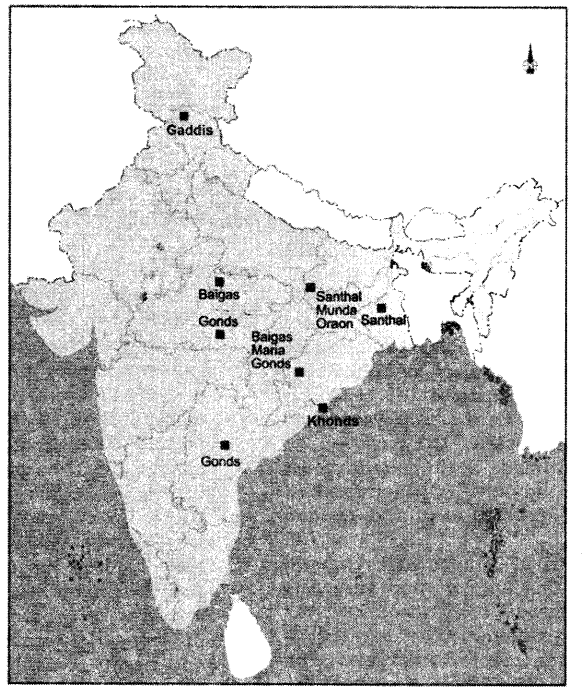 Questions:
(i) Who were the Baigas?
(ii) Why did Verrier Elwin visit their land?
(iii) What were the songs about?
Answers:
(i) The Baigas were a tribal group living in central India.
(ii) Verrier Elwin visited their land because he was very curious about them. He wanted to know their customs, and practices, their art and folklore.
(iii) The songs that he recorded lamented the hard time the Baigas were having under British rule.

Question 1.
Observe the given picture taken from NCERT textbook and answer the questions that follow: 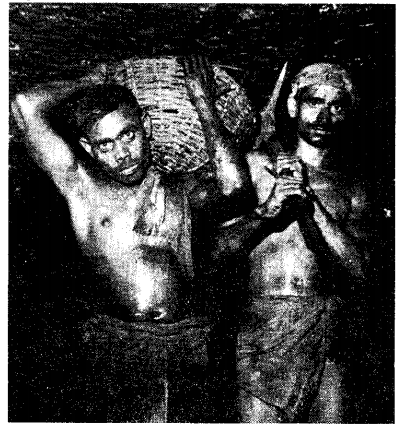 Questions:
(i) What do you see in the above picture?
(ii) Under what circumstances did they work?
Answers:
(i) They are coalminers of Bihar (new Jharkhand) 1948.
(ii) They had to work deep down in the dark and suffocating mines. Working in this condition was not only back¬breaking and dangerous, it was often literally killing.